One Soldier in God's Mighty Army 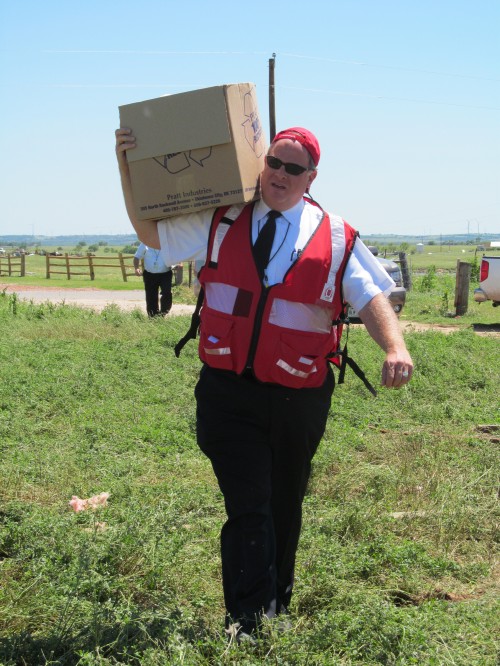 Moore, OK (June 4, 2013) - “This is the best sandwich I’ve ever had,” Heather Murray exclaims as she bites into the foot-long sub given to her by Major Tom Louden, Incident Commander for The Salvation Army’s Emergency Disaster Services response to the May Oklahoma tornadoes.

On Monday, June 2, Major Louden left the Incident Command center and his administrative duties to visit the areas in Canadian County, Oklahoma, hit by Friday night’s EF3 tornado. The storm, with winds gusting up to 165 miles per hour, left several Union City area families homeless. On the day Major Louden visited, they were picking up what personal belongings they could find--many strewn, in some cases, over nearly a mile of fields and farm land. The visit gave him a chance to do what he loves best—serve others in the name of the Lord.

Major Louden is no stranger to Oklahoma; he held a two-year appointment in Sand Springs as a Salvation Army minister and community leader (corps officer) and then a term of four years as the corps officer in Bartlesville. And he has suffered with Oklahomans; his first Emergency Disaster Services response experience was the Oklahoma City Bombing in 1995, and he served as Incident Commander when the Army responded to the Oklahoma tornadoes of 1999.

“In ’95 I was the Family Notification Center Coordinator; that’s the place where families gathered and waited for the positive identification of their loved ones’ bodies,” he recalled. “I watched Salvation Army officers connect with families and act as their guides, their shepherds. In one case I sent an officer with a family to collect DNA from home; they returned with some hair out of a hair brush. Another officer came back with a family carrying a toothbrush that belonged to one of the children who was in the daycare.”

It was while a young Tom Louden was at Asbury College that he realized his calling to live a life serving as God’s servant. A chaplain for the U.S. Senate spoke at a chapel service, and quoted Jeremiah 2:3 “…holiness unto the Lord.”

“In that moment everything around me disappeared,” he said, “and it was just about God. I realized that anything is possible when you are following God, and if I was doing what I want, and not what God wants, then I’m not living right.”

Twenty-three years later he crosses a field covered with CDs, kitchen appliances, and office supplies. On his shoulder he carries a box full of gloves, trash bags, and other recovery supplies to share with a family who has lost everything.

“Twenty-four hours ago we thought we were… messed up,” Joshua, the man who lived in the trailer home, explains.

With the help of a few family and friends, along with a nice warm meal from The Salvation Army, spirits began to lift as everyone took time from sifting through the weeds and debris.

Major Louden offers to pray with them and for them, and then he’s on his way.

It only takes one man to make a difference, but with the support of an entire Army behind him, Major Louden is delivering comfort and hope to entire families in Oklahoma.