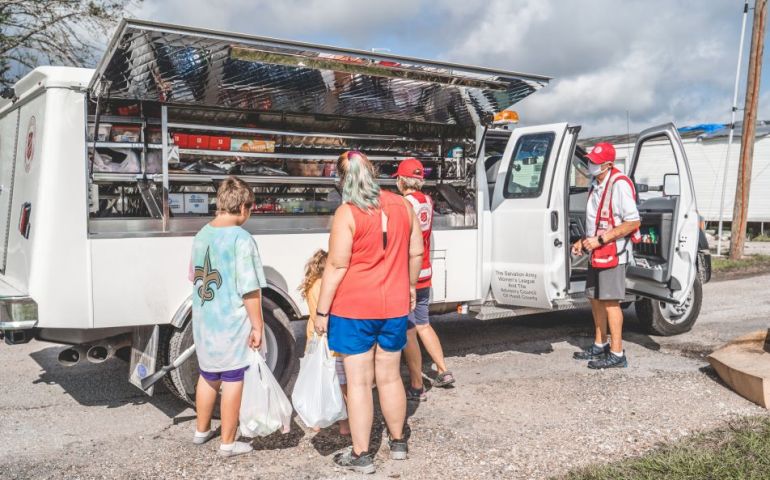 Lake Charles, Louisiana (October 14, 2020) – Twelve disaster response units and Salvation Army Emergency Disaster Services (EDS) teams hit the streets of Lake Charles, on day four of service, after Hurricane Delta tore through the area. In addition to serving meals, snacks and drinks, staff and volunteers had the opportunity to pray with more than 360 individuals on Tuesday.

Rapid Response Units and mobile kitchens, staffed by teams from The Salvation Army Texas and Arkansas/Oklahoma Divisions (AOK) and the Southern Baptist Texas Convention, delivered 7,434 meals, 5,602 drinks, and 2,817 snacks in Calcasieu and Jefferson Davis Parish on Tuesday. The fleet of disaster response vehicles and personnel from different cities, states, and organizations have quickly galvanized into an effective team under the leadership of the Incident Management Team from The Salvation Army in Texas.

“Our Incident Management Team from Texas has worked together on a number of large-scale response efforts this summer and get right to work like a well-oiled machine,” said Alvin Migues, The Salvation Army EDS Director in Texas. “It has been good to also collaborate with our colleagues from the AOK Division and long-time partners in disaster relief, the Southern Baptist Texas Convention. This group has come together very quickly and is a great example of how The Salvation Army’s disaster response and Incident Command model should function. They are doing a great job of serving the basic needs of the Lake Charles community, with many neighborhoods still without power.”

As of Tuesday, all Salvation Army units have been assigned permanent feeding stations at the following locations:

Another important aspect of any recovery effort is coordination with local emergency management teams and partners. “We have been actively working with VOAD, the United Way, the Governor’s Office of Homeland Security & Emergency Preparedness, and Little Caesar’s Pizza.,” said Migues. “As a result of these conversations The Salvation Army will be supporting a Point of Distribution (POD) at the Lake Charles Civic Center on Thursday and Friday (October 15-16, 2020) distributing food boxes, water, hygiene kits, and tarps.”