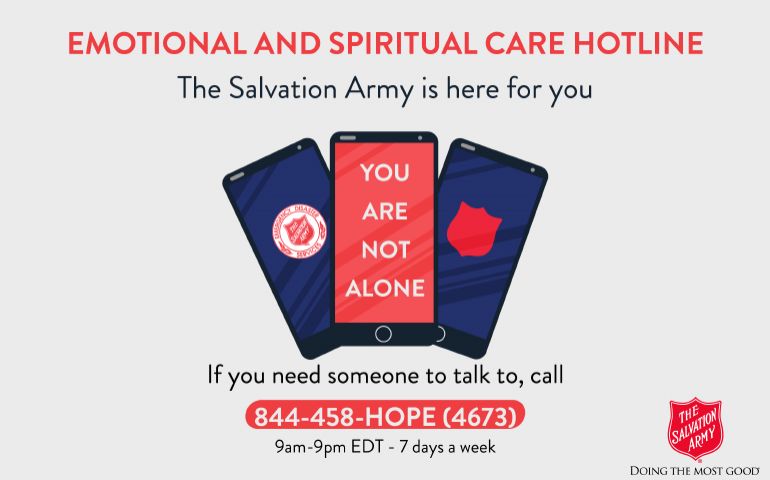 A lady in Florida, who is a breast cancer survivor but is now high risk for COVID. She was paralyzed with fear about it. We talked for about 20 minutes. We laughed, cried, prayed. By the time we got off the phone, she was in high spirits and was floored that The Salvation Army had such a phone number!

Dorothy is from Anchorage, Alaska. She just needed someone to talk to. Dorothy is a single mother and she has an 18 year-old son who is supposed to graduate this year. We had a good conversation for about 30 minutes, and she allowed me to pray with her at the end of the call.

Jovette (a 62 yr. old woman) from Ohio spoke for about 30 minutes. She has been sick for about 6 weeks, but is starting to get better. She does have children that come and check on her every day and her neighbors look out for her. She has no income at present, so is concerned for the bills that will come due. She has lived on her 401k for the last year, but that money has run out. Jovette was feeling a little anxious due to her situation and just needed a listening ear and some encouragement. I was able to pray with her at the end of our call.

Here is Patrick, from the Chicago area. Patrick was pleasant to talk to; he mentioned that he frequently calls the hotline…I think he just wants someone to talk to and share stories with. I asked him how he fills his days and he said with his faith. He begins his day by praying the Rosary and said he would add my name to his prayers! What a blessing!

Leah from Tennessee had gotten disconnected from another call, so we talked for only a few minutes. She and her husband grow vegetables to sell at their Farmer’s Market, so she had anxiety about that and whether the Farmer’s Market would even take place. (I gather that is a big chunk of their income). She also has an adult daughter in Michigan who she hasn’t been able to reach and was very worried about her. Leah allowed me to pray with her at the end of our call.