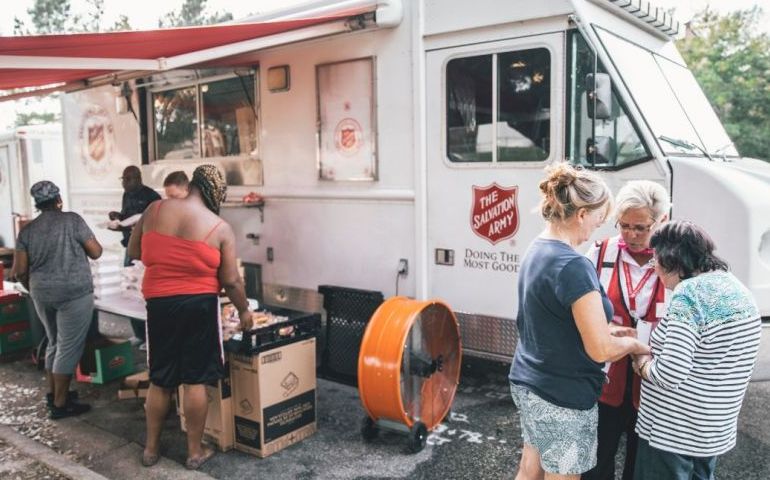 Goldsboro, N.C. (September 24, 2018) -- The Salvation Army provides food, hydration, and snacks as well as emotional and spiritual care in the aftermath of a disaster such as Hurricane Florence.  Most of these services are provided by the crew of a mobile feeding unit (canteen).

Whether serving in a fixed feeding location, such as a shelter or corner in the neighborhood or roaming through communities and rural areas, the crew members of a canteen often get to know those they are serving or have experiences they wish to share.

Here are just a few:

Other sentiments included being able to speak Spanish to a predominantly Spanish speaking community, being able to communicate with them and let them know we are listening and hearing their story to loving on babies while handing their parents a warm meal to feed the children or even giving a case of water to a family cleaning up the debris and trash in their yard in the hot sun.

Canteen crews often leave their own shelter early in the morning to cook breakfast and serve those impacted – cooking, driving, serving, listening, hugging, praying, cleaning, and doing it over two or three times a day – and being excited to do it again the next day.   They are truly an example of a servant’s heart.

Our prayers continue to be with the people of North and South Carolina.  The Salvation Army will continue to serve communities affected by flooding caused by Hurricane Florence.