Ten Years After Katrina, The Salvation Army Continues to Serve the Gulf Coast 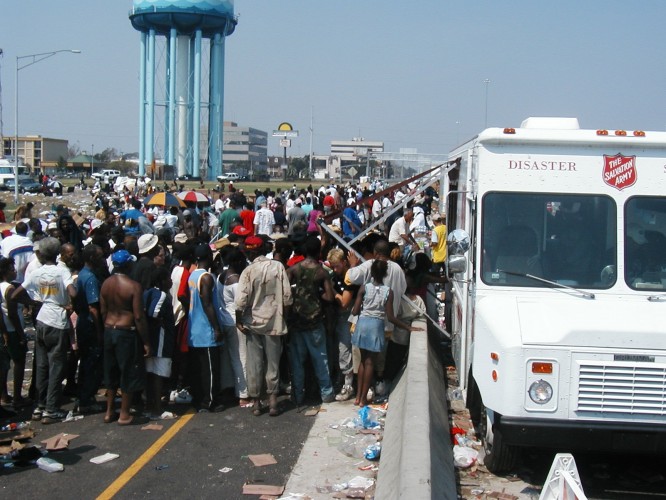 Alexandria, VA (August 19, 2015) – The Salvation Army continues to be a source of hope, stability and service to the residents of the Gulf Coast ten years after the most active and expensive hurricane season in U.S. history. With a presence in every ZIP code in America, The Salvation Army was uniquely positioned to support survivors during and immediately after the storm, and for years following.

The 2005 hurricane season – which included Katrina, Rita and Wilma, three of the most devastating hurricanes in U.S. history – spurred The Salvation Army’s largest emergency disaster response ever in this country. Generous donations totaling $382 million were received to support survivors of the storms; 100 percent of these funds have been disbursed.

“This was an unprecedented relief effort and would not have been possible without a generous outpouring of support,” said Commissioner David Jeffrey, National Commander of The Salvation Army. “It has been an honor to serve the people of the Gulf Coast and partner with them to rebuild their vibrant communities.”

Upon impact of the storms, Salvation Army emergency disaster workers and volunteers were on hand to deliver relief in the form of shelter, food and hydration, and emotional and spiritual care. A total of $157 million was spent on immediate response efforts that included:

As part of its overall recovery program in New Orleans, The Salvation Army initiated a neighborhood-based disaster recovery and economic resilience initiative called EnviRenew. Through this initiative, The Salvation Army supported new home construction, green home sustainability and technology, and eco-friendly energy programs in the hard-hit Broadmoor, Riverview and St. Anthony’s neighborhoods. The program sparked a broader conversation about disaster resiliency that culminated in a Resiliency Summit on August 26, 2010.

The Salvation Army was one of a number of charitable social services organizations participating in the Katrina Aid Today disaster case management program. This program provided long-term recovery assistance to hurricane survivors in impacted areas of Alabama, Louisiana, and Mississippi and to evacuees who relocated across the country to places including Arkansas, Colorado, Georgia, Illinois, Kansas, New York, Oklahoma, Texas and Washington.

Because responding to catastrophic disasters takes a significant toll on responders, The Salvation Army has invested in local disaster programming and resiliency programming including training, equipment and infrastructure, emotional and spiritual care, and increased post-deployment follow-up services for disaster workers. Additional community-based needs have been served through a variety of local programs, services and infrastructure projects.

“The Salvation Army is a long-term part of the community in the Gulf Coast, and everywhere in the United States where human need exists,” said Commissioner Jeffrey. “After disasters large or small, personal or communal, people rely on us to help them get back on their feet. This is a responsibility we take extremely seriously. It is our mission and our calling.”

The Salvation Army, an evangelical part of the universal Christian church established in London in 1865, has been supporting those in need in His name without discrimination for 135 years in the United States. Nearly 30 million Americans receive assistance from The Salvation Army each year through a range of social services: providing food for the hungry, relief for disaster victims, assistance for the disabled, outreach to the elderly and ill, clothing and shelter for the homeless, and opportunities for underprivileged children. Eighty-two cents of every dollar The Salvation Army spends is used to support those services in 5,000 communities nationwide. For more information, visit SalvationArmyUSA.org.