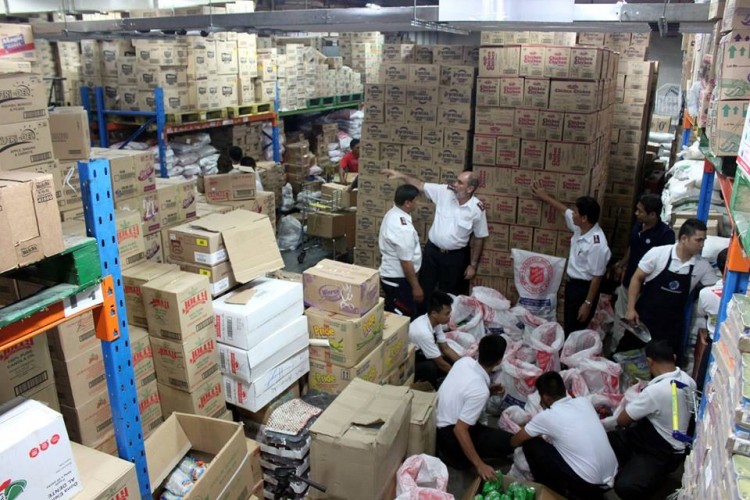 London, England (November 14, 2013) - Salvation Army in The Philippines is ready to assist the many thousands of people affected by Typhoon Haiyan. Territorial Commander Colonel Wayne Maxwell told International Headquarters representatives that Salvation Army teams are currently preparing to support the relief effort in the worst-hit areas and are addressing the logistics challenges of their travel and of the transportation of supplies.

Seven tons of food – rice and canned goods – have already been prepared for distribution in 18-kilogram packages. Transportation is a huge challenge but The Salvation Army is in a priority queue for government approval for its goods to be transported to the region in and around the city of Tacloban. Salvation Army staff are already on their way to take part in the relief effort. The region's geography is complicating any response, with the worst-hit area being made up of several islands.

On Leyte, the island that bore the brunt of the typhoon, there is no power and only very poor, intermittent cell phone capability, meaning that it is very difficult to get a clear picture of what is happening on the ground. Colonel Maxwell did say, however, that contact has been made with Salvation Army officers (ministers) in the region, and that all are safe.

The little contact that has been made has highlighted the scarcity of food and drinking water – and these are areas of ongoing concern. Colonel Maxwell explains: 'Salvation Army corps in the areas most affected – such as Leyte and the Visayas Islands – have fully distributed all available food from their welfare supplies and are keenly awaiting the arrival of food, water and medicine.'

In some areas that have suffered damage but not received media coverage, Salvation Army personnel are already helping people who have lost homes and possessions.

Damaris Frick, from International Emergency Services, has arrived from London and will be working in partnership with territorial headquarters staff to assess the needs. Tomorrow morning she will participate in an executive meeting with Salvation Army leaders. The Philippines Territory has an excellent record in disaster response but this event is on an unprecedented scale.

It is expected that Damaris will soon send specific requests for help based on the assessment of the situation, looking in particular at the needs that The Salvation Army can meet beyond the initial reaction that is already under way.

Colonel Maxwell says that mobile communication is a major issue – and unlikely to get better soon. The colonel says there is an urgent need for satellite phones that can be used by teams across the region – helping in the assessment of the situation and also improving the security of Salvation Army disaster relief personnel. International Headquarters is arranging for two phones to be bought and couriered to The Philippines immediately, but this will only deal with the most urgent need. The territory is also looking to source generators that can be taken to the worst-hit areas, with reports forecasting that power in some locations may not be restored for a year.

The colonel says he and the Salvationists of The Philippines are hugely grateful for the strong support they have received from around the world. Many Salvation Army territories are raising funds and offering assistance.

Photos from The Philippines can be viewed at sar.my/haiyanpics

Donations to support The Salvation Army's response in The Philippines can be made through local Salvation Army offices or online at https://donate.salvationarmyusa.org/typhoonhaiyan