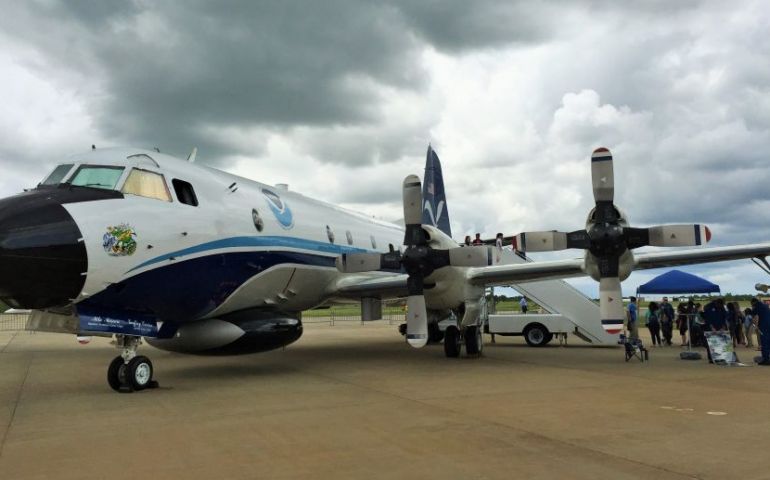 Charlotte, NC - It’s not every day that you hear “Charlotte” and “hurricane” in the same sentence. It certainly was the case 30 years ago, when Hurricane Hugo devastated the Charlotte area. And, then again, last week, as the National Oceanic and Atmospheric Administration (NOAA) Hurricane Awareness Tour made one of its five stops at Charlotte-Douglas International Airport.

The Salvation Army, represented by NSC Division and Charlotte Area Command, were on hand, alongside other emergency personnel and disaster relief agencies to talk to guests about hurricane forecasting, preparedness and disaster response.

The highlights of the Tour stop, which was popular among local school groups, weather aficionados and young families, were the hurricane hunter aircraft – the United States Air Force WC-130 and the NOAA P-3 Orion. The latter is the same aircraft that flew through Hurricane Florence last year and Hurricane Hugo in 1989.

These aircraft, and the meteorologists who work aboard them, are critical in collecting data that helps with forecasting and preparedness in advance of a storm’s landfall.

But, landfall is only the beginning of a storm’s impact. The focus of the discussion in Charlotte trended toward the next stage of the storm.

“What happens when the storm goes inland,” National Hurricane Center Director Ken Graham told The Charlotte Observer. “I think we’ve done a good job of educating about the coastal impacts. But the inland impacts … that’s a big issue for us.”

With its network of trained disaster staff and volunteers already on the ground when disaster strikes, The Salvation Army is ready to assist immediately to provide support (food, hydration, clean-up kits, hygiene supplies, and emotional and spiritual care) to first responders and survivors. This is important given that many areas become inaccessible due to rising floodwaters inland.

“Many people don’t realize that 83 percent of fatalities related to tropical weather systems are due to inland flooding,” Graham said. Many of those deaths occur when individuals drive into high water.

The major key to preventing fatalities during these tropical systems is educating the public about disaster preparedness and the dangers associated with flooding.

That’s what the Hurricane Awareness Tour is all about – providing an opportunity for people to learn about what goes into forecasting storms and how we can use this information to keep families safe.

And, if the unspeakable does happen, residents and first responders in those communities can trust that The Salvation Army will be there to speak hope.