A "Miracle" Means New Backpacks For Students in Victoria, Texas 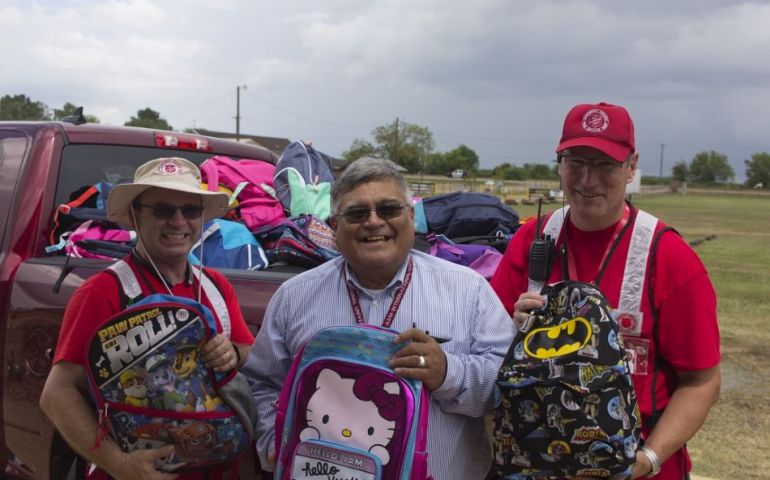 Victoria, Texas (September 29, 2017) – When Mr. Jesse Olivarez, Family Support Specialist for F.W. Gross Elementary School called at The Salvation Army, he hoped to pick up food and cleaning supplies for needy families of his students. Major Rick Ray, a member of The Salvation Army’s Incident Command Team in Victoria, helped to locate the food and items Mr. Olivarez requested and asked if there was anything else the school lacked. Finding out that many students were in need of backpacks, Major Ray couldn’t guarantee anything but promised to look into the matter.

“I told him I would aim for 200 backpacks and hope to find at least 100, but I hadn’t figured out where to begin looking yet,” commented Major Ray, of Bay City, MI. “I could hardly believe it when I walked into Incident Command that evening and discovered that well over a hundred backpacks had arrived that afternoon as part of a donation from Kerrville.” Some may call it a happy coincidence, but Mr. Olivarez called it a miracle. “I know that it’s God who has provided all this for our kids,” he said when he received word that he could collect enough brand new backpacks for each of his students.

Mr. Olivarez described his job responsibilities as including “professional scrounging” as he tries to help families in a school district where the need is great. He estimated that 20% of students at Gross Elementary are still displaced in the wake of Hurricane Harvey. “They’re couch surfing, staying with relatives,” he said. “Many more are in homes that are ‘livable’ but still in bad condition after the storm.”

Even still, he described the students as “happy” and “in good spirits” when they returned once school resumed. In fact, attendance is up following the two week long weather-related closure. “The kids are happy to be back with their friends and to be getting meals again.” Mr. Olivarez and the other staff members of the elementary school are glad to have class in session again as well, in spite of the damage the school sustained to its roof.

“This is such a blessing,” Mr. Olivarez said of the backpacks. “I’m so grateful for The Salvation Army looking out for the needs of our young people.” Major Ray maintains that he would have worked to track down backpacks, as he committed to but, “This time the Lord just provided in a spectacular way. I love it when He does that.”

As of September 28, The Salvation Army has served 839,213 meals, 849,692 snacks, and 890,673 drinks statewide in response to Hurricane Harvey. Emotional Spiritual Care Officers have ministered to 50,082 first responders and survivors.