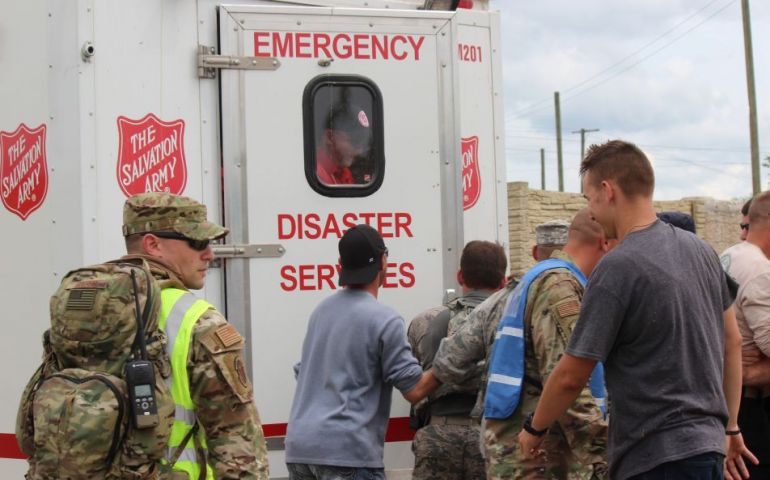 FORT MCCOY, Wis. (July 18, 2019) – During Patriot North disaster training operations at Fort McCoy Army Installation, the Security Forces teams invited Salvation Army canteen volunteers to play a role in their exercises over multiple days. While serving water and snacks, the canteens were surrounded by unruly participants simulating angry mobs of residents. The Security Forces practiced subduing the threat, and protecting the canteen volunteers from encroaching actors who were attempting to rush the canteen and take their supplies.

The partnership and trust being built between The Salvation Army and military Security Forces was a highlight for The Salvation Army McCoy Operations Chief Bill Grier, who said the training value of being involved in military exercises is priceless.

“The more involved they ask us to be in injects, the better off [The Salvation Army] will be in disaster response,” said Grier.

As someone who has been involved in disaster response for over 20 years, with 27 major deployments under his belt, Grier remarked that disasters “only work well when you have well-built, well-established partnerships” developed before a disaster hits. He continued, “So working together with the military, law enforcement, and the like is key” at disaster training exercises like Patriot North.

Canteen SATERN (ham radio) operator David Byrne reflected: “Often in Emergency Management we find ourselves waiting for something to happen, which happened to me yesterday waiting for the exercise to begin. So, I got lax in my situational awareness. Then when the exercise players surrounded our van, the surprise, and our reaction to it, was real.”

Agitated, aggressive, emotional crowds, like the ones simulated in the training exercise are not uncommon in disasters. Canteen volunteers Phillip and Christine Powers commented, “When we were deployed to California for the wildfires, we definitely saw people who were angry because of their situation.” “It can make you feel helpless,” they continued. So, learning how to respond to the crowds, and how to stay safe when the situation escalates, is important learning for them.

To learn more about how you can become a Salvation Army EDS volunteer, attend EDS training, or to donate to The Salvation Army, visit CentralUSASalvationArmy.org.