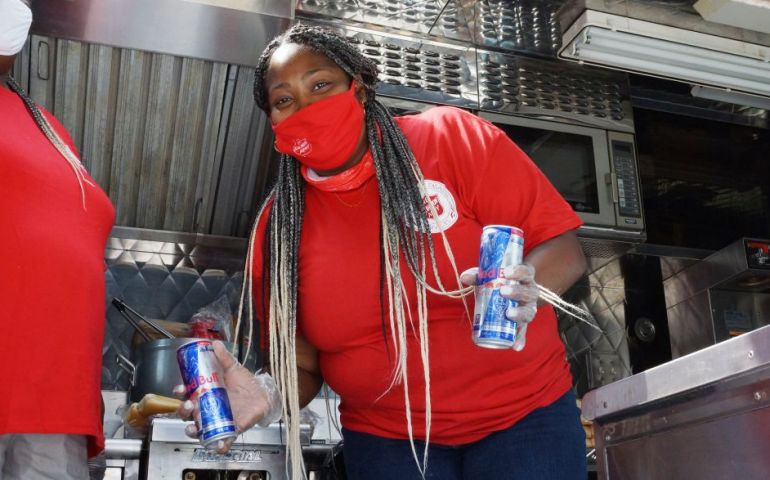 One canteen worker, Bianca Mosley-Greene, parks her canteen near a convenience store every day. She and her partner have several work crews who regularly come for lunches. One crew leader, stating he just wanted them to know they are appreciated, has started bringing them both a red bull in the morning to keep up their energy.

Another Salvation Army truck driver, Denise Rembert, received permission to set up each day outside a house in a particularly hard-hit neighborhood. In addition to allowing the truck to park in their yard, the owners come out each evening, after donning masks and gloves, and help serve meals. They also load up meals to distribute to neighbors unable to come to the site.

Ms. Mary Dejeam has lived in Lake Charles for over 50 years. Despite extensive damage to her house and vehicles, her cheerful spirit cannot be vanquished. When Salvation Army volunteers brought her cleaning supplies and water, she wound up ministering to them. “When you serve God,” Ms. Mary said, “You give. And even when you’re tired, God is not going to leave you.”

Other community members have given financially at the Lake Charles Command Center. “We’ve seen you out in the community,” said one such donor, who wished to remain anonymous. “And we wanted to give back and help with what The Salvation Army is doing here.”

The Lake Charles community remains resilient in the face of extreme devastation. The Salvation Army will remain by their side, partners in a recovery effort, determined to see it through.