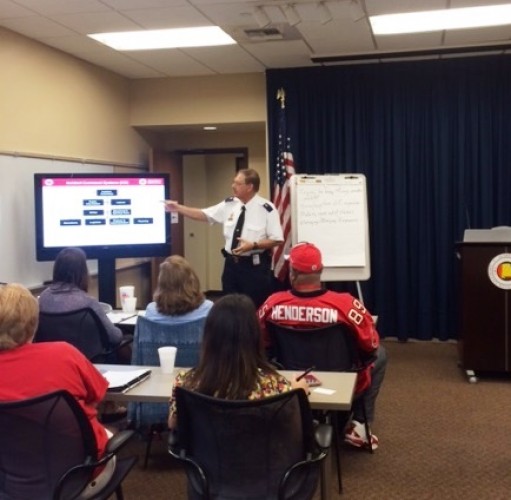 During the first day of the 1½ day training, the participants learned basic information about emergency management, how an EOC is organized and works.  In addition, the Incident Command System (ICS) and the roles and responsibilities of being a Liaison Specialist in an EOC were discussed.  On the second day the participants spent the morning in the Alabama State EOC receiving specialized training about how the State EOC is organized and operates and how to use the internal incident management system which is vital during an event.

Like ambassadors between nations, Liaisons connect their organization to other organizations.  Liaisons help coordinate the activities of their organization with others who are involved in the same incident. This is especially important during emergencies as organizations work to assist those in need without duplicating services or missing any group or area.  The Salvation Army and the American Red Cross both recognize that the response work during a disaster requires partnerships, as “many hands make light work.” According to ALM Interagency Liaison, Bill Feist, “The role of the Liaison is very important as this allows the communication between organizations to be clear and concise.”  Feist added, “It makes sense that we would train with The Red Cross since we are two of the largest non-profits active in disaster work, and we do so much work with each other.”

The Salvation Army, an evangelical part of the universal Christian church established in London in 1865, has been supporting those in need in His name without discrimination for more than 130 years in the United States. Nearly 30 million Americans receive assistance from The Salvation Army each year through a range of social services: providing food for the hungry, relief for disaster victims, assistance for the disabled, outreach to the elderly and ill, clothing and shelter for the homeless and opportunities for underprivileged children. Eighty-two cents of every dollar The Salvation Army spends is used to support those services in 5,000 communities nationwide. For more information, visit SalvationArmyUSA.org.