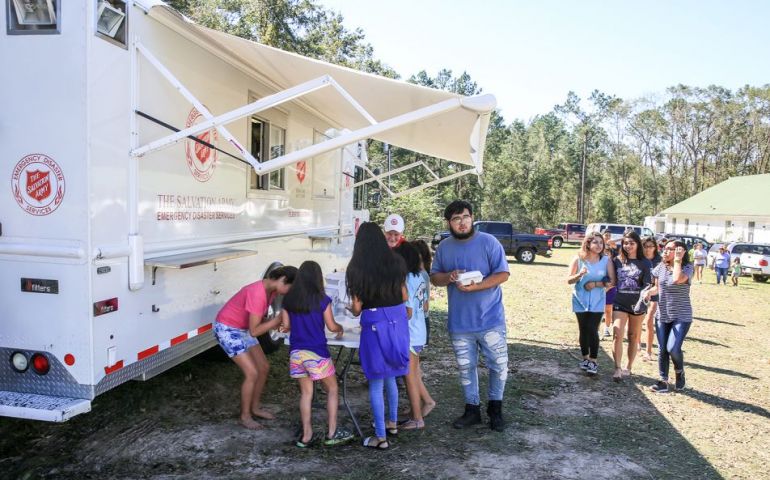 Bainbridge is a small town neatly nestled in the southwestern corner of the state of Georgia just over the Alabama and Florida state lines. It was first settled as a small trading post in the late 18th century. Residents are rightly proud of their little corner of Georgia, and will quickly remind you it’s the hometown of Georgia Bulldog Head Coach Kirby Smart.

Life is fairly laid back in Bainbridge. But, that all changed when Michael arrived hurling winds of 120 miles per hour down against the quite little town.

“Bainbridge was never seen anything like this before,” said Maria Diaz, a resident since 1999. “The last time anything close to this happened here was back in 1851.”

Bearing testimony to Maria’s statement, countless 100-year-old-plus live oak trees, that once graced the town, are now strewn across streets and lawns, and lay toppled over homes and businesses.

Many of the largest and most beautiful trees in Bainbridge are now either gone or severely disfigured. Waves and swaths of live oak leaves stripped from their branches by hurricane-force winds still swirl in the narrower back streets, like dark green glitter tinged with a smattering of road dust. Unripen acorns wretched from parental trees easily crunch underfoot at every step.

A few miles south of town, and a stone’s throw from Tallahassee Highway, almost 100 men, women and children huddled together inside the United Methodist Hispanic Hispanic Mission seeking shelter from the rages of Hurricane Michael, not knowing the fate of their clustered trailer-homes just over the tree line. Their fear grew in intensity as the raging storm winds increased and pressed trees down to their breaking point. At the height of the storm, the little group of gathered families huddled together in prayer for thirty minutes in the center of the chapel. At midnight, the power went out.

Local congregation leader, Jamie Gallaga, earlier pleaded with the little Hispanic community to shelter in the church from the storm. Much to Mr. Gallaga’s relief, they listened. Gallaga grew up on the Mexican Gulf Coast and shared his frightening personal experiences of what hurricane force winds could do. Although Gallaga is not an ordained pastor, its not important to the little Hispanic community. He took up care for the little Hispanic flock when the pastor assigned to the church was delayed by governmental red tape over a year ago, and they won’t forget his unfailing love and dedication to them.

“I’m glad they listened,” says Gallaga with tears in his eyes, “I can’t image what I would do if anything happened to one of these little ones,” he adds, as children run laughing, playing and chasing each other around the inside of the chapel.

The women and children stay at the Hispanic Mission Church during the day while the men go back to their devastated neighborhood to do what repairs they can. One man lost his trailer-home where he and his five children were living. He lost his wife a few years ago, and now must maintain his strength for his family to make it through yet another tragedy.

Gallaga’s step-son’s house is destroyed — crushed under numerous fallen trees. And two trees crashed through Gallaga’s home, too. “I’m not going to worry about my home or going back to work until the congregation is taken care of and none of them need to stay here anymore,” says Gallaga resolutely.

Just then, one of the best mobile kitchen units in The Salvation Army Georgia Division 21-canteen fleet from Elberton, GA, slowly navigates the turn into the driveway of the church—within a short time it is set up and ready to serve lunch.

Behind the serving window is 2016 Salvation Army Southern Territory Volunteer of the Year, Joe Johnson, now approaching 30 years of volunteer service. “I love doing this,” Johnson says, as a gaggle of pre-teen girls skip up to the canteen followed closely by their moms and younger siblings. “Hot dogs!” they exclaim excitedly.

“I don’t have words to express how much it means for you to help us like this,” says Gallaga.

“That’s what we do – helping people in their time of need,” says Johnson. “We’re with you, and we won’t leave Bainbridge, or the little Hispanic Mission, either, until all in need are served and safe.”