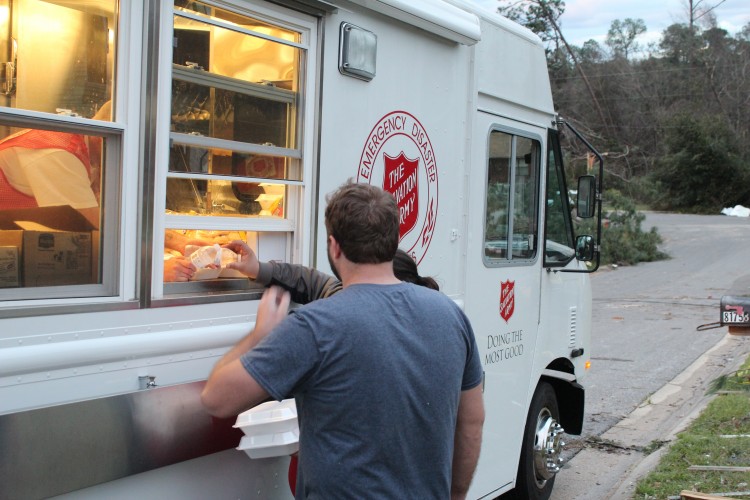 Rick Lowes lives in West Pensacola, a part of town largely unscathed during Tuesday night’s wicked storm that left a path of

destruction on the opposite side of town.  After seeing the jaw-dropping devastation left behind by a powerful EF3 tornado with whirling winds up to 155 miles per hour, Lowes felt he needed to lend a helping hand.  He decided to volunteer with The Salvation Army for the first time.

“After any disaster you want to help, but when it’s this close to home you just have to do something” said Lowes.

Lowes joined two other Salvation Army employees on the mobile canteen.  They probed the hardest hit areas looking for storm survivors, volunteers and emergency responders to offer a free hot lunch.  Driving through the Northpointe community – one of the hardest hit areas – you quickly notice even after two full days of clean-up there is still a great deal of work to do.  A portion of the Moorings Apartment complex is left in rubble.  Nearby houses are left without roofs and some had no walls exposing everything that miraculously weathered the storm.

Seeing the faces of elderly men and women sitting in the front yards of their once beautiful homes now in ruin.  The sheer desperation that masks the faces of once proud homeowners now sifting through debris trying to salvage what they can.  These heartbreaking images deeply touched Lowes.  While the chicken nuggets, French fries, corn and biscuits may appear to be a small token of sustenance at the surface, Lowes quickly realized these hot meals meant so much more.  The meals, the cleaning supplies and cases of water The Salvation Army provided are what HOPE looks, feels, smells and tastes like.  It shows affected residents, they are not alone on the long road to recovery.

“Handing people a hot meal and watching them smile makes this experience worth it” said Lowes.

Lowes says his first experience volunteering with The Salvation Army is just the first of many.  His willingness to help with the tornado recovery efforts demonstrated to him, he is ‘Doing The Most Good’.