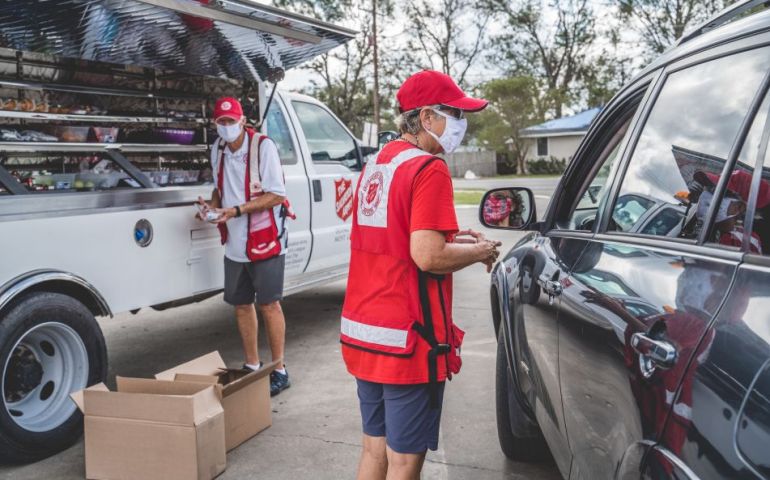 Lake Charles, Louisiana (October 13, 2020) – After several demanding weeks serving Lake Charles communities affected after Hurricane Laura, The Salvation Army Emergency Disaster Services teams from Texas have returned to those same neighborhoods now beaten by Hurricane Delta. Much of the area is once again without power and The Salvation Army service continues to be focused on providing food, drinks, and emotional and spiritual care to those in crisis.

“We continue to see a lot of folks who are affected by these last two storms struggle with some very basic needs but they are resilient and always thankful.,” said Alvin Migues, EDS Director for The Salvation Army in Texas. “This is a very challenging situation, not only for residents, but also from a response perspective. We hope to be able to provide at least a warm meal and a sense of hope in the coming days to the people of Lake Charles.”

The Salvation Army will be serving in the following locations on Tuesday:

“Yesterday, our unit went to the same town I served in during Hurricane Laura response. This time much of Iowa is flooded.,” said Linda Dowell, a Salvation Army EDS volunteer from Granbury, TX, serving alongside her husband David. “Many of the houses that had tarps lost them during Hurricane Delta and now ceilings have collapsed too. Please keep everyone in your prayers.”