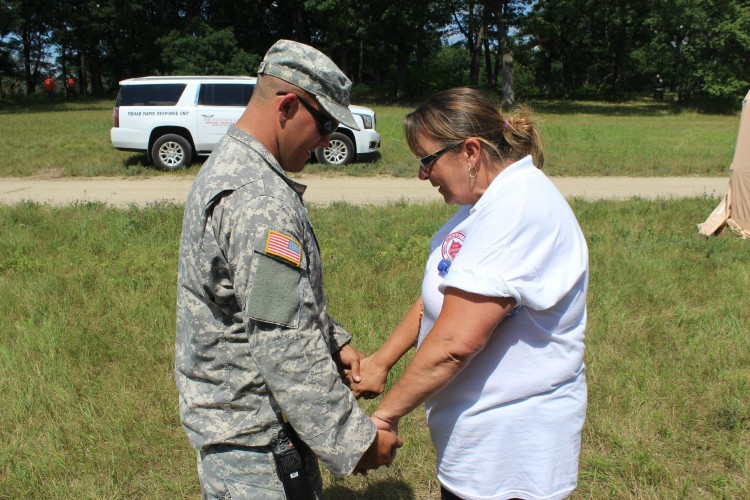 “The variety of issues that came up was huge. They ranged from a lost animal to a loved one who had passed,” said DeWayne Householter, a Salvation Army volunteer from Peoria, Illinois.

Householter is one of four Critical Incident Stress Management (CISM) trained volunteers serving as a chaplain in the PATRIOT 2015 exercise, an annual Domestic Operations training exercise sponsored by the National Guard Bureau and accredited by the Joint National Capability Program. The training focuses on improving coordination with local, state and federal organizations. For The Salvation Army, that allows Emotional and Spiritual Care volunteers an opportunity to train alongside National Guard chaplains.

“The National Guard is helping responders in uniform capable of what they do for a short period of time, usually a week or two. There’s a much greater number of civilians and with The Salvation Army bringing their expertise and bringing others in that are active… in that way we can both provide good emotional and spiritual care and be really complimentary of each other,” said a staff officer with the National Guard Bureau.

“Our being here is by invitation because we train to CISM. They (the National Guard Bureau) see us as a lead in CISM training,” said Major David Dalberg, The Salvation Army Metropolitan Divisional Disaster Services Director and Emotional and Spiritual Care Officer at PATRIOT 2015.

Critical Incident Stress Management is an adaptive, short-term psychological helping process that focuses solely on an immediate and identifiable problem. Its purpose is to enable people to return to their daily routine more quickly and with less likelihood of experiencing post-traumatic stress disorder.

John Sharpe, a Salvation Army volunteer from Chicago, Illinois, said he was able to share some of his own training with the military chaplains he worked alongside in the field hospital.

In return, Sharpe said working alongside military chaplains during this week’s exercise taught him how to deal with on duty military personnel and their needs.

“They let me into their world, which I am grateful for,” he said.

Leaders at The Salvation Army and the National Guard agree the PATRIOT exercise has the ability to strengthen relationships nationwide.

“What is happening here in Wisconsin has potential to expand across the country. Interestingly enough, the chaplains here (in this exercise) are not Wisconsin-based. What’s happening here will go back to other states,” said Major Dalberg.

Added the National Guard Bureau spokesman, “We’re going to encourage all over the country that these National Guard chaplains will find The Salvation Army in their community, get to know each other and receive the training.”