Caring for Carteret County with More Than Food and Water 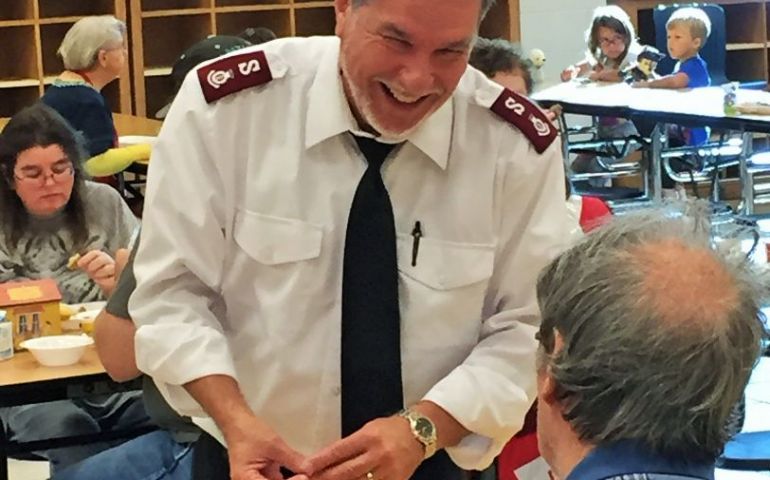 NEWPORT, NC (September 22, 2018) – In times of disaster, The Salvation Army provides for immediate needs like food and water. But, it is also there to provide a listening ear, a warm hug or handshake and a kind word of encouragement.

“I’m here to be an encourager. I take wearing the Salvation Army uniform very seriously,” said Major Stan Colbert. “They see these S’s and they know they’ll get a positive experience, whether I have all the answers or not.”

In addition to serving as the Incident Commander, Major Colbert has spent a large amount of time ministering to people who are hurting the most. Major Colbert, along with Emotional and Spiritual Care Officer Lt. Jeremy Lind, have had a consistent “ministry of presence” at Newport Middle School, the evacuation shelter the Carteret County Department of Social Services set up just before the hurricane made landfall. For nearly a week and a half now, it’s been the home to the displaced – from those who lost power to those who lost everything. And, The Salvation Army has been ministering to each one.

Colbert wants them to know that there’s someone at this time of their life that will connect with them at their point of need.

“I have never seen people come into a disaster looking for Jesus,” he explains. “It’s incumbent on us to plant a seed. I want to model a positive attitude. I hope someone sees and say I want a little bit of what that guy has.”

The Newport shelter has housed as many as 400 at its fullest. Most who still call it home have no other home to which to return. There have been babies as young as three weeks old, and even a mom who recently went into labor and had to leave to give birth. There have been seniors, veterans, moms and dads. There have been individuals, and there have been families. Needless to say, the people here have a lot of concerns.

“One consistent thing I’ve heard from people is ‘I don’t know what I’m going to do.’” Indeed, there’s a hopelessness that can rise up when you are thrust into a situation that’s beyond your control. The Salvation Army’s officers are there to provide a word of hope.

During meal times at the shelter, you’ll find Colbert smiling, shaking hands and talking to guests.

“It’s very relational. I believe that’s the way Jesus did it. He was relational, usually with a small group of people,” Colbert said. “I want them to be comfortable. They’ll be more likely to hear what I have to say if there’s a level of trust there.”

“I was taught as a child that the Salvation Army uniform is an outward sign of an inward witness,” Colbert said. “I want people to know that when they see anyone dressed in the uniform that it’s someone who’s going to be my friend.”