Faith is Tested During Hurricane Ian 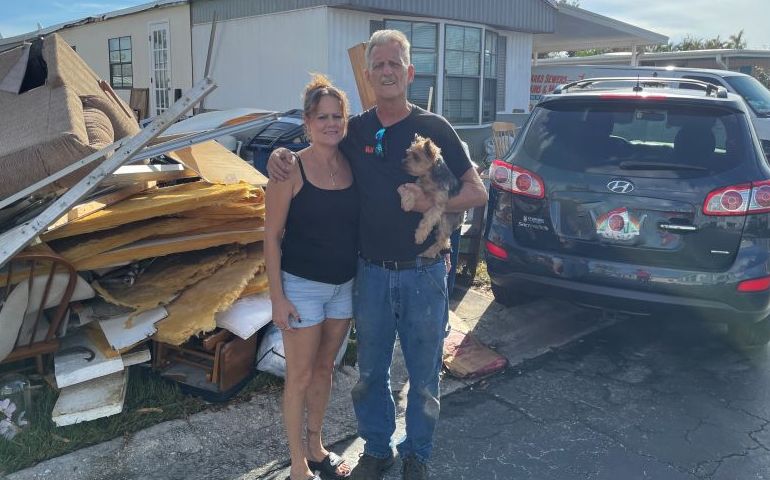 Soldier rides out storm with family in mobile home

(Fort Myers, FL) – During the nine hours that Mark Wicks and his family rode out the storm he says there were a few times he started questioning God. “I learned what it means to pray without ceasing,” said Wicks, a soldier at the Fort Myers Salvation Army Corps, where he has attended for five years.

Wicks, his fiancé Jody, and his 89-year-old mother Polly, rode out the storm in his mobile home, which sits less than two miles from the Gulf of Mexico. The structure took the full brunt of Hurricane Ian, with winds of 150 mph whipping it mercilessly for hours on end. “We started in the living room, watching TV. Then we moved to the bedroom, and finally ended up in the hallway. Our porch roof was torn off and we had to hold the door closed to keep out the storm surge and the wind,” said Wicks as he showed me damage around his home.

Eventually some of the exterior walls began to lift slightly, and Mark said it’s at this point he feared they were going to perish. Water began to pour in through the air vents in the floor. Mark said he prayed with his friend over the phone, who called him from St. Charles, Illinois. “When the water started coming in the vents, I thought we were going to drown. I put mom on the kitchen table. I started praying even harder for the Lord to keep the water out, and that’s when it stopped. I thought about when Jesus calmed the seas on the Galilee, and He spared us,” said Wicks.

Mark said the local Salvation Army Corps in Fort Myers where he attends has been very supportive in the aftermath of the storm. “We went down there and Area Commander Major Carlyle Gargis prayed with me. He is my friend,” said Wicks. The Salvation Army has also given him some supplies to aid with his cleanup efforts.

Since the storm, Mark has been busy with his plumbing business. He is working long hours to help others, and he needs the work as he doesn’t have insurance to cover the estimated $10,000 in repair costs to his home. “I’m just blessed to be alive, and I thank the Lord for that daily.” Mark and Jody are scheduled to marry in early 2023.

Since October 1, The Salvation Army response team in the Fort Myers area has served the following:

The Salvation Army plans to continue its response as long as needed, and is coordinating its efforts with federal, state, and local officials, as well as other social service agencies.