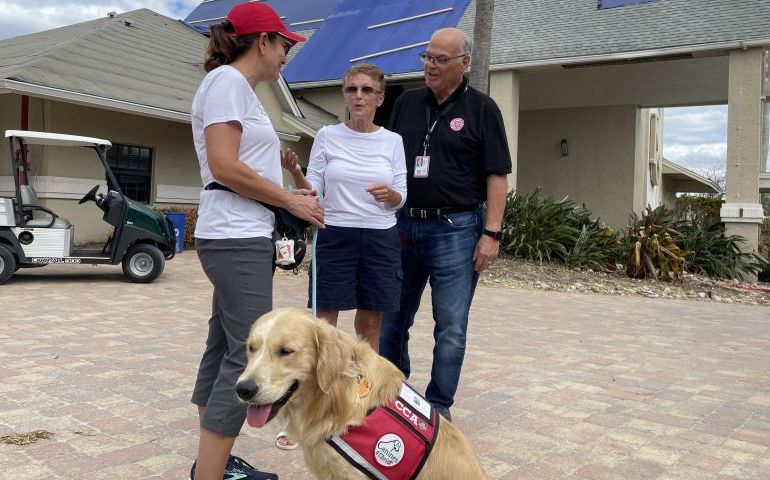 Fort Myers, FL – One nonprofit is partnering with The Salvation Army and using the power of puppy love to bring emotional relief to survivors of Hurricane Ian. On Saturday, a Golden Labrador Retriever named Dunkin toured around homes near Fort Myers Beach where survivors were cleaning out the first floor of condos that were inundated by 3 to 4 feet of storm surge.

Tina Reeder, Dunkin’s handler, and an ordained chaplain with Canines 4 Christ, says the adorable Golden Lab went through extensive training to be certified as a crisis response therapy dog through the American Kennel Club. “The mission of Canines 4 Christ is to share the love of Jesus Christ in times of despair through the dog. People stop and pet the dog, and it gives us an opportunity to talk and pray with them,” said Reeder.

The impact of Dunkin’s presence was immediately apparent in his interactions with approximately 40 hurricane survivors at a condo complex in Fort Myers. One after another, those working on salvaging belongings in flooded-out homes flocked to Dunkin, asking to pet him, and letting Dunkin give them some love during their time of need. Several became emotional after their interaction with Dunkin, including Edith Mitchell, who with her husband had traveled down from Wisconsin to check on their condo. “He reminds me of my dog who passed some time ago, and I just want to keep petting him,” said Mitchell as she lovingly stroked the Labrador.

Later in the day, Dunkin made his way back to The Salvation Army’s command post in downtown Fort Myers. Disaster workers who had just returned from a long day of serving others from mobile kitchens were able to spend some time with Dunkin, and the reactions were like those of the survivors. “He’s just precious,” volunteer Michaele Gulledge from Dekalb, Alabama said, “He refreshed my spirit, lifted my spirits. He’s a puppy and he just loved on me after a long day!”

When asked why The Salvation Army partnered with Canines 4 Christ on this hurricane response, Bobby Martin, the Emotional and Spiritual Care Officer for The Salvation Army’s Emergency Disaster Team in Fort Myers said, “Animals are accepting of everyone, and dogs typically remind people of a better time in their lives. The focus of the person is instantly moved to the dog and no longer on their current circumstances.”

In addition to being a crisis response therapy dog, Dunkin is also a social media star, and his fans can follow him on Instagram at @dunkinlovin. For more information on Canines 4 Christ, please visit their website at https://k9forchrist.org/.

Since October 1, The Salvation Army response team in the Fort Myers area has served the following:

The Salvation Army plans to continue its response as long as needed, and is coordinating its efforts with federal, state, and local officials, as well as other social service agencies.