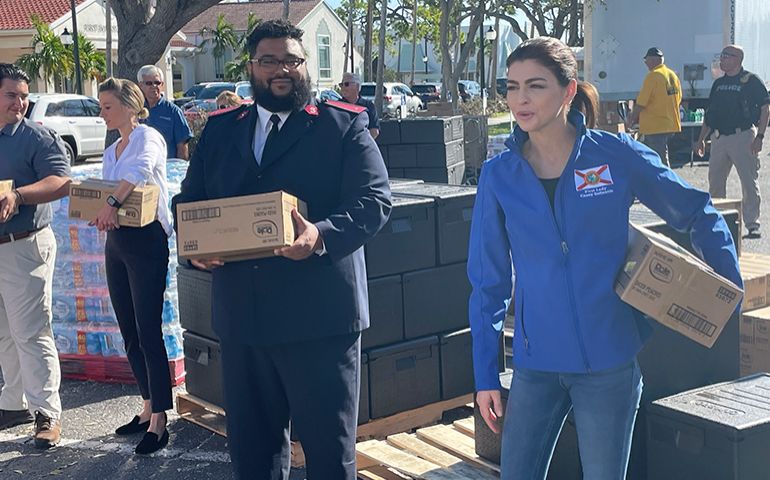 VENICE, FL – Florida’s First Lady, Casey DeSantis, visited a food distribution site today in Venice to meet and thank Salvation Army disaster workers who are staffing some of the mobile feeding units deployed in south Sarasota County. She also visited with emergency workers from Missouri Baptist Disaster Relief, a disaster services partner who is preparing the meals being distributed by The Salvation Army’s mobile canteens.

“The First Lady was very appreciative of the assistance being given by both The Salvation Army and Baptist kitchen disaster response teams,” Dupree said. “She also asked about how we are able to respond to disasters as quickly as we do.”

The Venice location is the fourth Salvation Army command center established in southwest Florida because of Hurricane Ian. It is providing disaster services in the Venice, Englewood, and North Port areas, which includes the feeding operations for eight mobile canteens.

“We’ve been providing hot lunches to people who have been without power or have been displaced by the hurricane since the first of the week,” said Captain Jason Smith, who is managing the Venice command team. “So far this week, we’ve distributed 16,000 meals, snacks, and beverages in Sarasota County. We are also adding a dinner service today, and may add more dinners in the future, based on degree of need.”