Salvation Army is on the Ground in Fort Myers, FL after Hurricane Ian 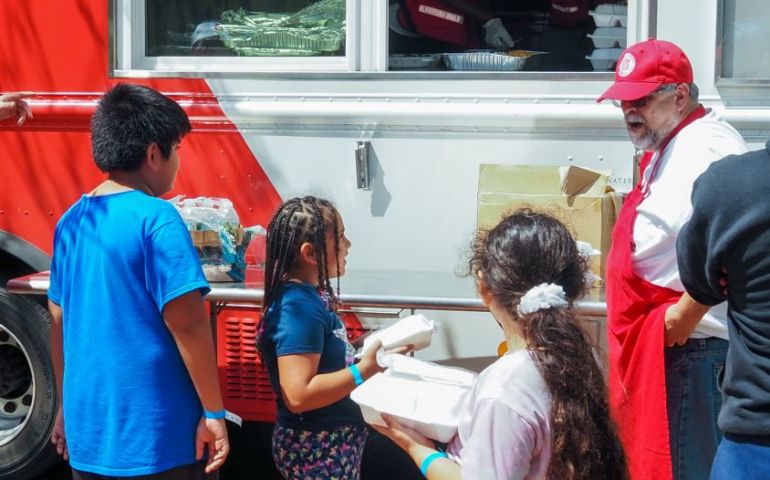 Fort Myers, FL - With a fitness center, disc golf, a dog park, and event spaces, the Estero Park and Recreation Center in Lee County, Florida is usually a site full of laughter, excitement, and family fun. Since Tuesday, however, the center has been a different kind of family center as a shelter for evacuees from Hurricane Ida.

Over 500 residents weathered the storm in the building as winds whipped around them and the parking lot flooded. While many cars are damaged, water never entered the building. A staff of around 40, including traveling nurses, animal services, Deputy Sheriffs, and parks and rec employees have worked round the clock to keep residents safe and as comfortable as possible.

Traveling nurses, Kiari Lee, Shantrell Houston, and Sheena Woodside have been at the shelter since Tuesday and expect to be here at least week if not more. With power out in the entire area, they are using one generator with four outlets to alternate charging oxygen machines for their patients. They were excited to receive their first cooked meal in days. “This is awesome. We really appreciate it.”

Tom and Eileen DiFruscio had reservations at a hotel but were unable to get out in time once evacuation orders were issued.  “A hot meal is such a blessing,” said Tom. “At this point, it’s the little things that count.” Eileen was able to eat her first full meal in three days. “I was grateful for the MREs, but I just couldn’t eat them. This hits the spot.”

Kim Garrett, one of the supervisors, broke down in tears when she was told Salvation Army personnel travel in from across the Southern Territory to deliver aid. “I’ve been telling my staff….we work with non-profits all of the time to put on fundraisers. THIS RIGHT HERE is why that is so important. The Salvation Army is here to take care of us because they were given funds by someone else. We all support each other. We are so grateful.”

With many communities still cut off by downed trees or flooded roads, The Salvation Army will continue to assess and send out teams wherever it is safe to do so. Incident Commander, Kevin Chinault, said, “We are blessed to be able to serve, and we plan to be here as long as we are needed.”