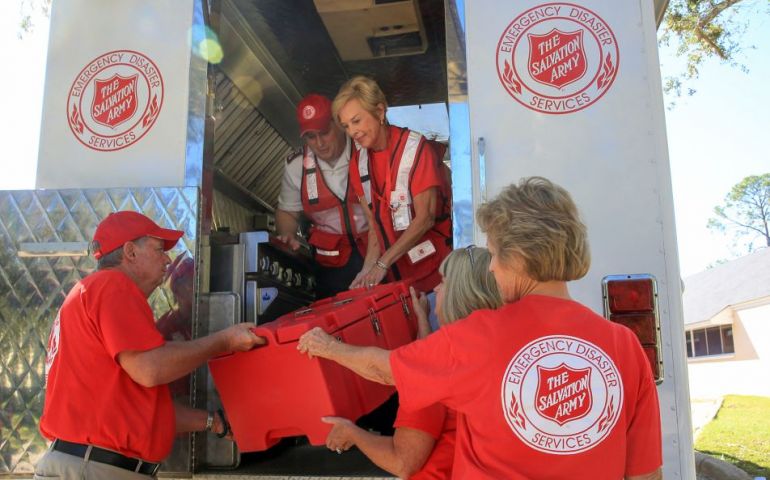 ROME, GA (September 7, 2022) – The Salvation Army of Georgia is working with local and state agencies and other disaster response partners to address the damage in affected communities following flooding in North Georgia on Labor Day. As a result of the flooding, Governor Brian Kemp has declared a State of Emergency in Chattooga and Floyd Counties.

Captains Tim and Paula Blevins, Rome Corps Officers, cover the impacted area and are working with Ms. Lloyd to collaborate with both County Emergency Management Directors and GEMA representatives to respond effectively to those areas most impacted by the flooding.

The most significant initial concern for Chattooga County was the damage to its water system. Early in the response, The Salvation Army worked with the Midwest Food Bank to deliver a much-needed tractor-trailer load of bottled water. The Georgia State Patrol picked up the water and transported it to the Summerville, GA area. In addition, clean-up kits, wet wipes, personal hygiene kits, storage bins, and hand sanitizer have been and will continue to be distributed as long as needed.

Due to the lack of water, restaurant closures, and low-income areas that suffered damage, a Salvation Army Rapid Response Unit (RRU) was dispatched from nearby Dalton, GA, to deliver cooked meals to impacted areas. An RRU is specifically designed to be able to access affected areas potentially unreachable by larger vehicles. The Salvation Army is providing food cooked and prepared into single meals by local Southern Baptist churches. These meals, along with snacks and drinks, are then delivered by the RRU to more inaccessible areas of need. The RRU unit has delivered approximately 300 meals daily to affected areas.

In times of disaster, The Salvation Army is a trusted responder. With the generous support of communities, The Salvation Army can meet immediate needs during disaster responses. The best way to help relief workers and those impacted by disasters is to make a financial contribution. Financial contributions allow disaster responders to immediately meet the specific needs of those affected.

How you can help: