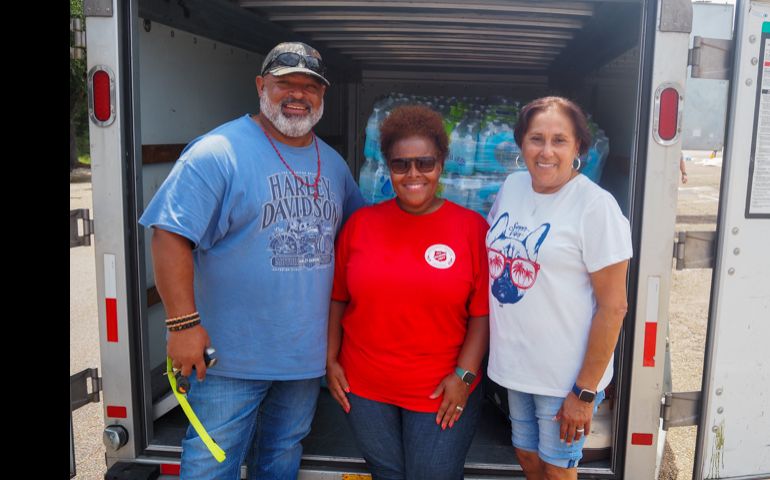 Jackson MS (August 31, 2022) - In response to the ongoing water crisis in Jackson, Mississippi, Mary and Gene Ozan felt compelled to load up their truck and a U-Haul trailer with as much water as they could and drive almost seven hours from Houston, Texas to Jackson.

“I woke up yesterday, and the Lord just put it on my heart to pick up water and bring it down,” said Mary. Gene added, “She had so much conviction and was tearing up. When the Lord is speaking, who are we to argue?”

Mary and Gene were able to add their water donation to a distribution event already underway and join Salvation Army volunteers in the sweltering Mississippi heat to load water into cars.

Incident Commander, Major Bill Shafer expressed his gratitude, “This is the spirit of our country. This is not just neighbor helping neighbor. This is state helping state. How blessed are we to live at this time.”

The Salvation Army is continuing their efforts to provide relief to the residents of Jackson. Much of the city is at a standstill as public schools moved online, restaurants closed, and businesses struggle to operate without reliable running water.

Donations to support relief efforts may be made online at helpsalvationarmy.org or by calling 1-800-SAL-ARMY.