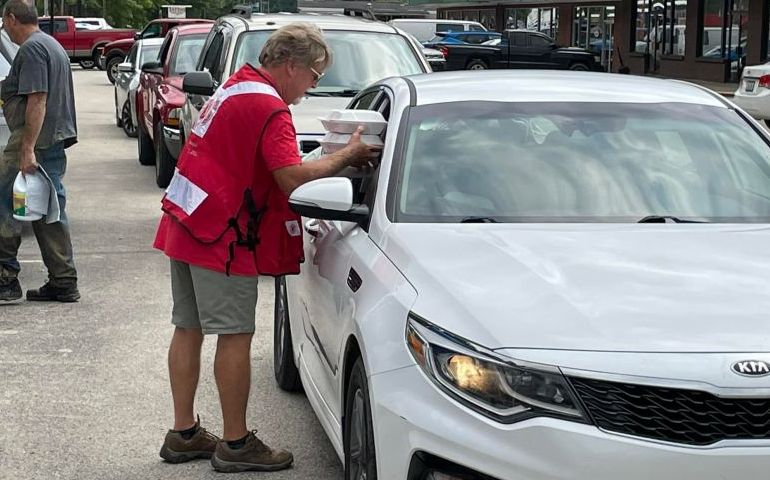 (Hazard, KY) – The Salvation Army’s relief effort in Eastern Kentucky shifted into high gear on Monday, with multiple new units arriving from around the region. Mobile kitchens from Louisville and Jackson, Tennessee, joined the one from Richmond which had been serving since Saturday. A Rapid-Response Unit, a smaller pickup truck unit that can transport meals into harder to reach areas, joined the effort as well from Middlesboro. “Many of the hardest hit areas are the most difficult to reach. We want to ensure those folks aren’t left out when it comes to assistance,” said Bo Sells, Salvation Army Incident Commander.

Since the beginning of the operation on Friday, The Salvation Army has served 3,308 meals, 712 drinks, 261 cases of bottled water, 937 snacks, 812 cleaning supplies, and have provided 1,003 individuals with emotional and spiritual care. The areas the Army has served so far include Breathitt, Perry, Knott, and Letcher counties. Assessment of conditions is ongoing to determine if service needs to be expanded further.

Major Tom Louden, Divisional Commander for Kentucky & Tennessee, wants to make sure the public keeps the people of Eastern Kentucky in mind and in their prayers. “The loss of life is devastating. Our prayers are with the families of those who have been lost and all those that have been affected by this disaster. Sometimes, when waters recede, memories can fade as well. But the folks affected by this disaster have a long road ahead of them. And The Salvation Army intends to walk alongside them on that journey,” said Major Louden on Monday.

To make a financial donation to this relief effort, please visit https://helpsalvationarmy.org or call 1-800-SAL-ARMY (800-725-2769). 100% of disaster donations go to help the relief efforts.