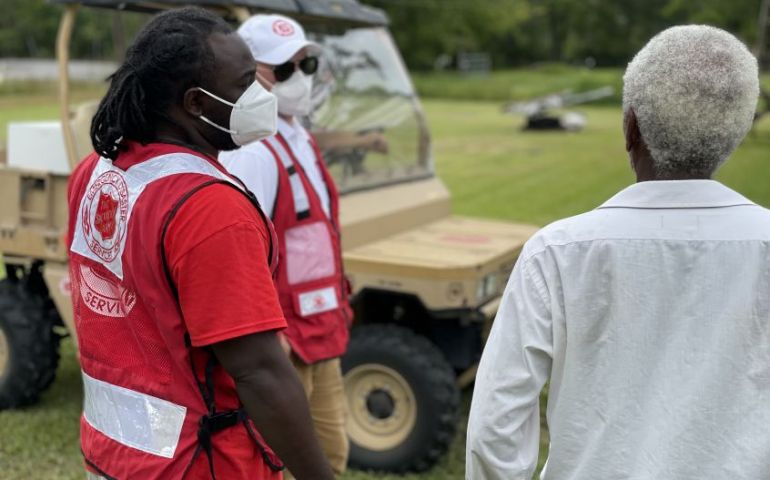 Gonzales, Louisiana (September 16, 2021) The small city of Gonzales Louisiana is known at the Jambalaya Capital of the World and is located between Baton Rouge and New Orleans. When Hurricane Ida roared out of the Gulf of Mexico on August 29, hurricane force winds and heavy rain caused significant damage and power outages to the community. As soon as the storm passed, The Salvation Army was in the area to help meet immediate needs of residents. Teams will continue response operations to help local residents recover as long as needed.

Salvation Army officer Captain Dakarai Darby is on the ground in Gonzales, serving on an emergency disaster response team from Decatur, Georgia. He met the pastor of a small church who told them that several members of his congregation were deeply affected by Hurricane Ida and needed assistance but were not able to go out to get help. Captain Darby knew what he had to do next.

“We decided the only way we could make sure all people could get help is to bring our services to the people,” Captain Darby said. “A couple of us began knocking on doors to check on people and to make sure anyone and everyone who needed help got it. That’s how we met Brian.”

Brian is an older gentleman who lives alone and had a terrible time riding out the storm. He had been without food and water for over a week when the team knocked on his door. They delivered supplies to Brian and continued to check in on him to make sure he had everything he needed. Initially, Brian was very quiet and reserved, yet as Captain Darby continued to check on him, he began to share stories and tell jokes.

On a most recent visit, Captain Darby was able to pray with Brian, who said he was very grateful for the compassion and friendship shown by the team. When asking Captain Darby what it means to him to be able to go out and serve, Captain Darby replied, “It is a blessing to be able to spread the love of Christ in The Salvation Army way of providing hope and a prayer.”