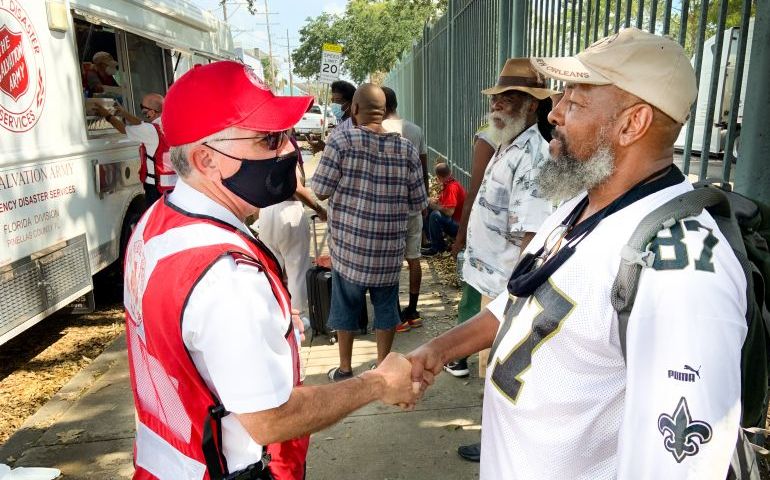 “I didn’t think it was going to be what it was,” said Ken Stroughtor, a resident near downtown New Orleans. “Even if I wanted to evacuate I couldn’t, it came so fast.” Ken echo’s what many New Orleanians are saying, that their time was short, and a decision had to be made. Stay or leave now! “I’m so grateful that The Salvation Army made it out here. I knew when I saw the truck, we were going to be okay, at least we’ll have a full belly.”

“As the need grows, we will shift in what we offer just to make sure were doing all we can to meet as much need as we can in Jesus’ name,” said Commissioner Willis Howell, leader for The Salvation Army in the Southern Territory. Commissioner Howell shook the hand of Ken Stroughtor and listened as Ken shared his experience surviving Ida. “What a privilege that we have to serve,” the commissioner concluded. He and his wife Barbara served throughout the day while providing emotional care and prayers for those that waited in the feeding line.

The Emergency Disaster Team arrived in New Orleans late Monday night and has been serving from sunup to sundown every day sending 19 mobile feeding units into local neighborhoods.