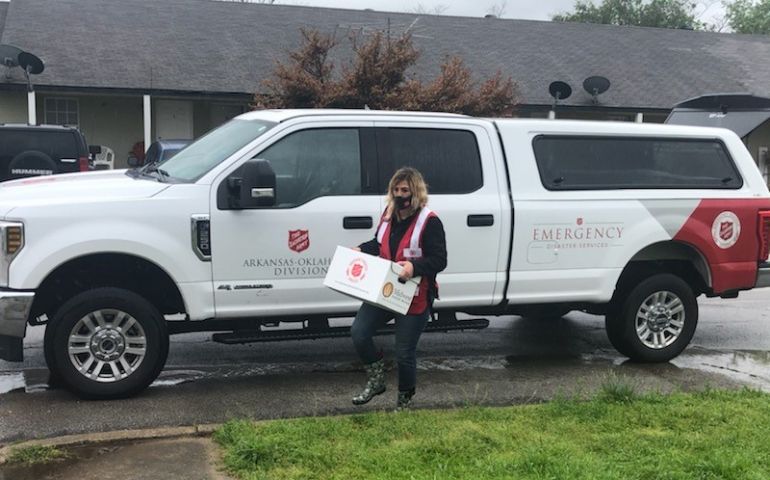 Oklahoma City, OK (May 10, 2021) In the aftermath of the recent NW Arkansas flooding caused by the severe storm systems that moved across the Midwest, The Salvation Army was able to meet the needs of an already poverty-stricken neighborhood in Rogers, Arkansas. Loaded with brand new mattresses that were generously donated to The Salvation Army to be used during an emergency disaster response, as well as food boxes, a Salvation Army Disaster Services truck made special deliveries to these households who had recently lost everything.

“To see the devastating destruction that these floodwaters caused is simply heartbreaking. Every street corner is piled with furniture, mattresses, and debris from inside of these homes that are no longer safe to keep,” noted Laurie Fried, Divisional Director of Disaster Services for The Salvation Army’s Arkansas & Oklahoma Division.

Staff and Emergency Disaster Services volunteers went door to door in the neighborhood, assessing needs and immediately delivering the food boxes and mattresses to those who critically needed these items to safely sleep, as well as feed their families. In addition, Salvation Army representatives were available to talk with and pray for the families and individuals whose lives have been completely turned upside down in the wake of the recent storms.

“To be able to provide a listening ear, or sometimes even a shoulder to cry on, is often one of the needs of a natural disaster survivor that goes unnoticed. However, emotional, and spiritual care is one of the services The Salvation Army takes great pride in making a priority during these times of emergency response,” said Captain Andrew Thorson, commanding officer with The Rogers Salvation Army.

Mattress deliveries concluded Tuesday with all available mattresses being distributed directly to the homes in some of the hardest-hit areas.