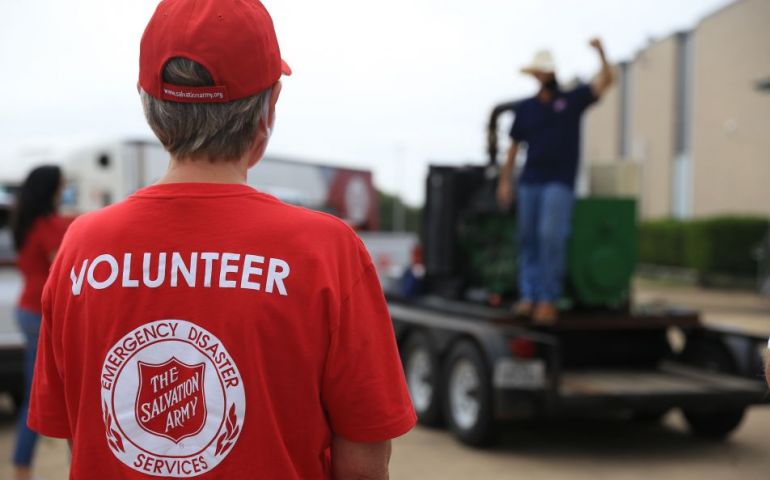 Beaumont, Texas (October 9, 2020) – Hurricane Delta, the 25th named storm of the 2020 Atlantic season, made landfall on Friday evening as a Category 2 storm near Creole, LA. The main path of the storm is almost identical to that of Hurricane Laura, which hit the Gulf Coast only six weeks ago on August 29, 2020. Several communities in the devastating path of Hurricane Laura once again have found themselves preparing their homes, and their hearts, for yet another disaster.

The Salvation Army Texas Emergency Disaster Services (EDS) teams arrived in Beaumont on Friday afternoon and early evening, traveling from around the state and driving into heavy rain and deteriorating conditions associated with the storm. A ten-vehicle convoy consisting of Rapid Response Unit trucks, an Incident Command Center semi-trailer, housing trailers, and more pulled into The Salvation Army warehouse in Beaumont that housed the Hurricane Laura Incident Command post only a few weeks ago. The EDS team is staged close to the Louisiana border, providing convenient access to Lake Charles, LA, and will head out early on Saturday morning to assess the damage and commence service delivery.

One key feature of The Salvation Army’s disaster response model is that it is quickly scalable depending on the extent of the disaster. Immediate response begins at a local level, and additional support and resources can be called upon and deployed from neighboring cities, counties, and even states to facilitate large scale relief operations. “It amazes me to see how we can all come together and provide the essentials to those who may have lost everything,” said Linda Dowell, a volunteer from The Salvation Army Women’s Auxiliary in Granbury. “After just returning home from several weeks service after Hurricane Laura where I met so many people, I truly cannot fathom what they must be feeling now as the next storm arrives. That is why I am here to serve – I know I can offer a cold water, a hot meal, and a prayer.”

The Salvation Army, an evangelical part of the universal Christian church established in London in 1865, has been supporting those in need in His name without discrimination for more than 130 years in the United States. Nearly 30 million Americans receive assistance from The Salvation Army each year through a broad array of social services that range from providing food for the hungry, relief for disaster victims, assistance for the disabled, outreach to the elderly and ill, clothing and shelter to the homeless and opportunities for underprivileged children. 82 cents of every dollar The Salvation Army spends is used to support those services in 5,000 communities nationwide. For more information, go to www.salvationarmyusa.org.