“When All Else is Failing, The Salvation Army Delivers Hope” – Judge John Stevens 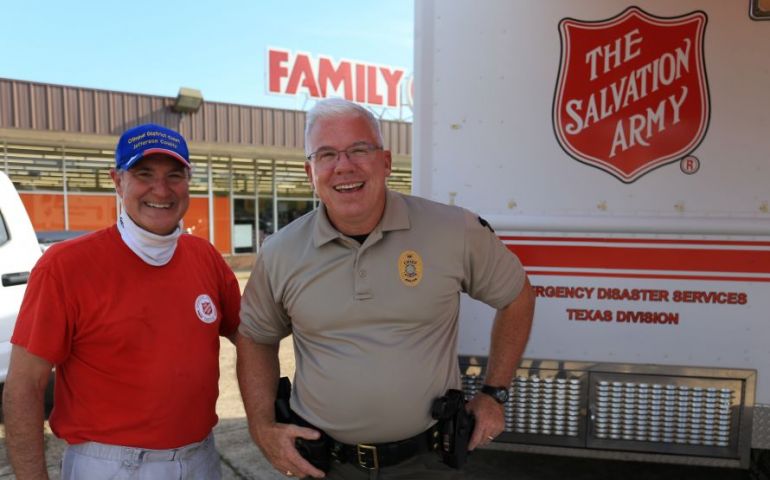 Beaumont, Texas (September 3, 2020) – The Advisory Board members of The Salvation Army meet monthly, often accepting special responsibilities on various committees and sub-committees while helping to charter the course and support the efforts of their local unit. There are many opportunities throughout the year for Advisory Board members to roll-up their sleeves and get dirty in Salvation Army ministry. Emergency Disaster Services response is one such time.

Court was closed on Monday in Beaumont due to Hurricane Laura, and Judge John Stevens, Criminal District Court Judge for Jefferson County, Texas, found himself with a little extra time on his hands. Always one to look for hands-on opportunities to support The Salvation Army, Judge Stevens approached Captain Jason Moore, Commanding Officer of The Salvation Army in Beaumont, about volunteering with the disaster response team. Before he could say “this court is adjourned,” Judge Stevens had been given a red Salvation Army disaster volunteer T-shirt and was assigned to a mobile kitchen crew for the day.

Serving in Vidor with the team from Lewisville, Judge Stevens got to experience firsthand the impact the practical ministry of The Salvation Army can have on people in need. “Here we are after Hurricane Laura and many people don’t even know where to begin after losing so much,” said Judge Stevens. “The Salvation Army gives them that beginning, a leg-up to get their life back in order. When people feel like all hope is lost and when all else is failing, The Salvation Army delivers hope.”

On Monday, the team from Lewisville, with the addition of the Judge served 2,190 meals, the highest total of any mobile kitchen crew that day. “I’ve been an advisory board member for more than 10 years,” said Stevens. “My father was the Chairman of The Salvation Army in Port Arthur when I was growing up, so it’s multi-generational. I am happy to carry on that legacy and hope my children will do the same. My family and I have been here to help others in some of the most extraordinary emergencies including Hurricane Harvey and Imelda, where so many people in Southeast Texas lost their homes due to flooding.”

Judge Stevens had a great time serving with the team from Lewisville and noted how appreciative the people were who came to receive food. “We had a steady flow of people coming for a meal and served chicken and rice for dinner, which is of course a great staple in Southeast Texas. It looked great and we even included some special Texas seasoning. The people just kept coming and it was a privilege to be involved in the response efforts of The Salvation Army.”

There are several volunteer opportunities available at The Salvation Army disaster warehouse in Beaumont supporting Hurricane Laura response. If you have a couple of hours,  or perhaps a whole day, and would like to volunteer please email texaseds.volunteers@uss.salvationarmy.org or come directly to The Salvation Army disaster warehouse located at 1490 N. 7th Street Beaumont TX 77702 at 9 AM, Monday-Sunday.

“The Salvation Army is simply angelic. When you most need them, like angels, they show up to help those in need who feel all is lost,” said Stevens. “The Salvation Army will continue to have my wholehearted support and I’m honored to be a part of this fine organization.”