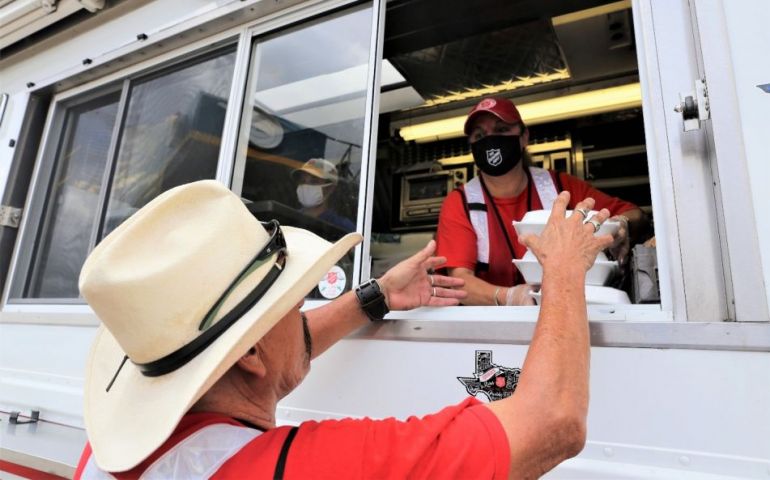 Beaumont, Texas (September 2, 2020) – It is often said that volunteers are the Army behind the Army. That statement is never truer than during emergency disaster response. Trained volunteers who have selflessly deployed during Hurricane Laura have gone the extra mile, particularly considering the ongoing COVID-19 pandemic and the searing heat and humidity of Southeast Texas.

Rudy and Martha Zapata, from Lubbock, have served as Salvation Army Emergency Disaster Services volunteers for more than 19 years. They have responded to tornadoes, wildfires, floods, and hurricanes close to home, and across the country, and are well known to local emergency response partners in West Texas. The Zapatas are ready, literally at a moment’s notice, to deploy to any disaster site and meet the needs of those affected. Their mobile kitchen is spotless, inside and out, and is perfectly organized. Behind their canteen they tow an ATV giving them the ability to deliver food and assistance deep into neighborhoods which may be inaccessible to a full-size mobile kitchen.

“My brother Jesse, who attends The Salvation Army church in Lubbock, introduced me to the Emergency Disaster Services program. From the very first time I stepped foot in a mobile kitchen, I loved it,” said Rudy. “I have been active as a disaster volunteer for more than 19 years because I enjoy serving others. But more than that, ultimately I hope they can see God working through my wife and I.”

The Zapata’s son, Victor, is a Marine and is currently serving in North Carolina. He has been gone for nine months and only returned to Lubbock on leave a month ago. The Zapatas were placed on standby as Hurricane Laura barreled towards the Texas coastline, and then received the call to deploy to Beaumont. “We were looking forward to spending the last few days with our son before he had to return to North Carolina, but that’s when we received the call asking us to come and serve in Southeast Texas,” said Martha. “At first, I was sad, but Victor told me we should go and help those in need because he knows we love to serve with The Salvation Army. It is a blessing to know our efforts, even if it’s just a hot meal, can make a difference to someone struggling after a disaster.”

“The Salvation Army volunteers are bound together by one common thread: Sacrifice. Oftentimes, providing relief to people affected by disasters requires them to leave their loved ones behind, work in extreme weather conditions, and perform tasks that are physically and emotionally demanding,” said Kathleen Kouns, EDS Volunteer Coordinator for The Salvation Army in Texas. “These brave men and woman do not seek accolades or recognition, rather their service towards others is rooted in their love for Jesus Christ. The Salvation Army would not be capable of reaching the number of individuals it does without the unconditional sacrifice of volunteers.”

The Salvation Army is serving food in the following fixed locations on Tuesday: