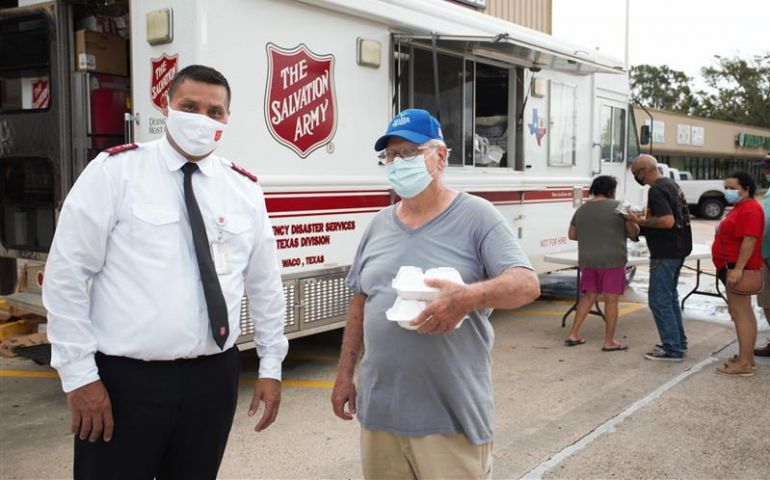 Dallas, Texas (August 29, 2020) – Widespread power outages across Southeast Texas are currently one of the main challenges for many residents affected by Hurricane Laura. The Salvation Army Emergency Disaster Services (EDS) teams and mobile kitchens pulled into several of the hardest-hit communities on Friday, serving lunch and dinner. The hot meals were gratefully received by residents, many of whom are without power in their homes and have been unable to refrigerate or cook food since the storm.

Eight mobile kitchens, each with the capacity to prepare and deliver 1,500 meals, and three Rapid Response Units, left The Salvation Army warehouse in Beaumont on Friday morning stocked with supplies, meals, and water. Units staffed by Salvation Army trained volunteers and employees from Waco, Lewisville, Midland, Beaumont, Lubbock, Abilene, Granbury, and Tyler were in position at designated locations in time to serve lunch. In Bridge City, news of the lunch-service had been received on social media, and a steady line of people patiently waited to receive food throughout the day on Friday. More than 500 meals were served in Bridge City alone. The Salvation Army is serving food in the following locations on Saturday:

“You are the first help that we have seen since the storm,” explained one grateful resident who has been without power for two days and is working to clean up fallen trees and branches from his home. “I was lucky that I didn’t have any damage to the house but all the food I had in my refrigerator has spoiled since I don’t have power. We’ve been through this before after Hurricane Rita, Ike and Harvey but it’s still so hard to deal with. I am thankful for the help The Salvation Army brings.” He left with a hot plate of chicken, rice and beans and the promise that The Salvation Army team would return in the coming days.

Beginning Saturday, the Southern Baptist Texas Convention Kitchen is preparing the meals to be served from The Salvation Army mobile kitchens. “This is a long-standing relationship that allows staff and volunteers to serve food, kept warm in cambros, as opposed to actually cooking on the mobile kitchen. This simplifies and expedites serving food to hungry residents,” said Alvin Migues, Director of The Salvation Army Disaster Services for Texas. “The Baptist Convention Kitchen will be preparing 5,000 meals a day and expand as needed.”