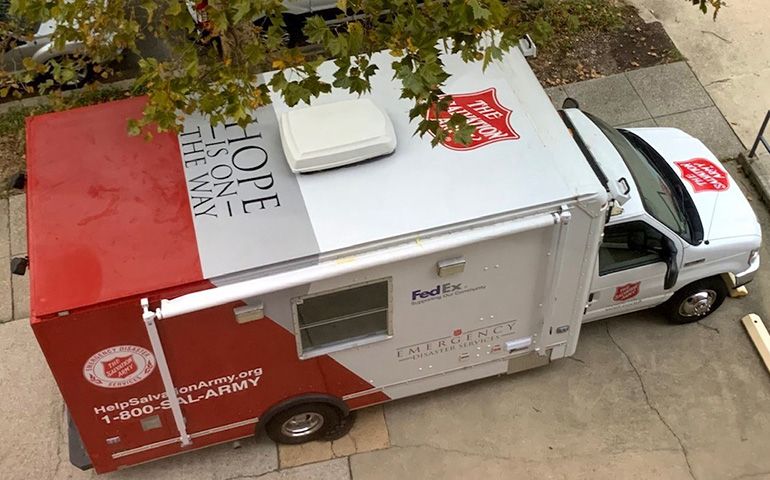 WASHINGTON, DC (August 4, 2020) – The Salvation Army stood ready and were prepared in advance of Tropical Storm Isaias along the Virginia and Maryland coastline. While monitoring the track of the storm throughout the weekend, Salvation Army personnel and equipment were ready to be mobilized along the southeastern coast. Isaias was downgraded from a hurricane to a tropical storm on Sunday and hovered over the mid-Atlantic this morning. Communities along the Virginia and Maryland coast faced drenching rains, high winds, and coastal flooding, with several areas reporting tornado activity.

“We continue to assess and evaluate the aftermath of Tropical Storm Isaias,” says Major Bobby Westmoreland, from the National Capital & Virginia Division of The Salvation Army. “While the winds and rain may have subsided, many of our areas are at risk for tidal or river flooding. We, along with Salvation Army units up and down the storm's path, stand ready to bring comfort to those in impacted areas in the name of Jesus.”

Concerned for the homeless in their area who had no shelter from the forecasted high winds and rain, The Salvation Army of Cambridge Maryland quickly assembled a shelter in their building. In Suffolk, Virginia, where tornadoes touched down in the downtown area, The Salvation Army of Suffolk continued with their planned lunch distribution. They did receive requests for additional food from families impacted by the storm and resulting power outages. Other feeding operations continue across Maryland, Virginia, West Virginia, and Washington, D.C. This includes the drive-through meal program at the M&T Bank Stadium Lot C, where close to 3,000 meals were distributed today.

The Salvation Army in Maryland, Virginia, West Virginia, and Washington, D.C. has close to 20 mobile feeding units (canteens) which can be stationed to quickly provide feeding, hydration, and emotional and spiritual care during times of disaster. The Salvation Army also has bottled water, clean up kits, and meals ready to be distributed at a moment’s notice from their warehouses across the region.