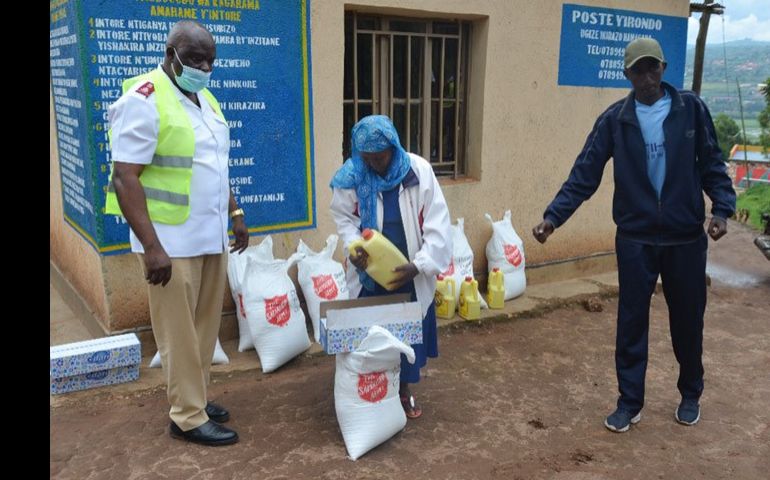 Reaching Out to Support and Encourage:

Lt. Colonels Seth and Janet Appeateng lead The Salvation Army’s Rwanda and Burundi Command. They shared with Jo Clark (Program Resources, International Headquarters) how The Salvation Army in Rwanda has been coping with the changes brought about by the response to COVID-19:

Here in Rwanda it is almost three months since we first went into ‘lockdown’ – although since 4 May some restrictions have been lifted. Life hasn’t been easy but at least we have been able to go out to the supermarket or pharmacy for essentials throughout. The lockdown has been effectively policed, with checks being made on the street as to where you are going if you are outside.

With restrictions on movement, people who have their own small businesses, and who earn money to buy and eat on a day-to-day basis, have particularly struggled as our time in quarantine has gone on. There are many in the city of Kigali who haven’t been able to work (traders, pikipiki motorbike riders and drivers, etc) but who are also not able to go home to their villages because of the travel restrictions that were put in place to stop the spread of the virus.

Although for the past few weeks some traders and daily workers have been able to find employment, pikipiki riders still cannot operate, and travel between provinces remains prohibited until 1 June. Masks must be worn at all times, and the number of passengers in public transport vehicles has been reduced as part of prevention measures. This makes it difficult to plan journeys. Our employees are often not able to report to work on time because of these restrictions.

We have two corps (churches) in the city and the people in these areas have been continuously asking the corps officers (ministers) for support. This has been difficult for the corps officers who were also struggling themselves and did not have the means to help even those in their immediate communities, despite a deep desire to do so. We are thankful that International Headquarters has been able to support us to access project funding so we have been able to prepare packages of food items for some of the most vulnerable of our locked-down population, especially those within the city communities close to our corps.

We have also been able to contact the executive secretaries of local government (those with administrative governing responsibility for sectors and cells) who gave us additional lists of those who are known to be amongst the most vulnerable in their areas.

During three days at the end of April we were able to distribute 350 packages of food (containing rice, maize flour, beans and oil) to vulnerable families in Batsinda and Kimironko communities in Gasabo district. In addition to the food we were able to share soap and some COVID-19 educational information flyers in each package. Additional flyers were also given to the government for its awareness efforts.

To avoid a large gathering of people, teams of around ten (made up of Salvation Army officers, sector executive staff and community cell leaders in Gasabo District) went from house to house, distributing the packages according to the lists. In a few cases where people couldn’t be reached, the packages were given to the local chief to be distributed. Some also remained to be distributed by corps officers in other communities.

Recently we were able to extend our support by supplying hand-washing materials to corps and centers, since we have come to realize that much more awareness is required in terms of sanitation in times like these. As things stand however, our schools will remain closed until September and there is no news concerning when churches will be allowed to reopen for services and other gatherings.

We continue to have concern for our officers in the field who, with the lack of tithing income, are struggling to manage and yet also want to serve their communities. In a time when isolation is increasing due to the fear and stigma associated with potentially having the disease, more than anything they desire to visit their comrades as means of encouragement.

However, without protection, and under strict quarantine rules, they have not been able to do so.

We have been able to reach out to some people with Bible messages and church services via social media and other online platforms (particularly during the Easter period) but Internet connection is limited outside of the city and fewer people now have money to buy mobile phone data to stay connected.

In the meantime the telephone continues to be our lifeline, with regular calls to colleagues, staff and corps members enabling us to keep together and to check on how each other is getting on.