Hartford Hub is Humming Along, Providing Much Needed Food Amid COVID-19 Pandemic 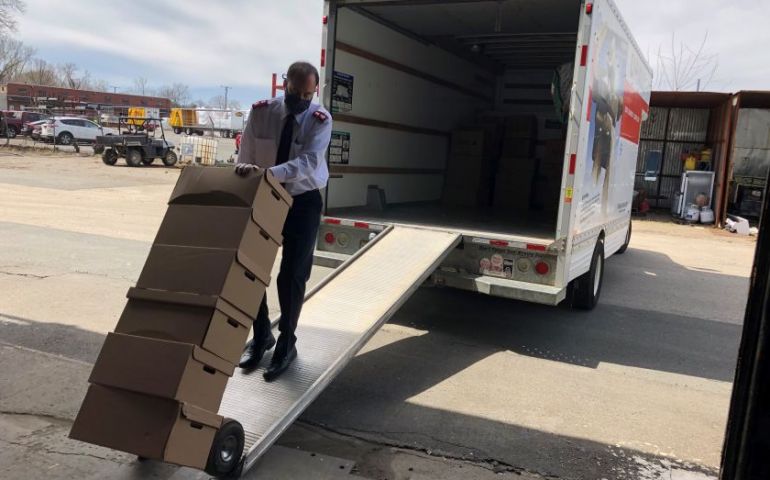 HARTFORD, CT - Bolstered by a delivery from Foodshare this week, The Salvation Army’s Hartford Hub is humming along, providing much-needed food to residents in need affected by COVID-19. The Hartford Hub, located at a donated warehouse space, is a point of collection, assembly and distribution of food boxes to Salvation Army locations.

Major Cathy Himes, Salvation Army officer in Manchester, helped organize the day’s efforts, including the packing of food boxes being transported to Salvation Army locations. “This is a disaster that has affected the whole world,” said Major Himes. “Everybody has to pitch in and help their neighbor.” The Salvation Army in Manchester has been sending notes and making regular phone calls to people who are unable to leave their residence and recently made deliveries of Easter baskets to brighten their day. “We wanted to bring joy into their lives – something normal. They need to know they haven’t been forgotten.”

While Salvation Army officers and volunteers makes phone calls, they also check on any needs that may be present, including grocery shopping. “You find some people that are very weepy when we speak with them over the phone, especially those that are alone,” said Major Himes. “They are lonely, afraid and miss people. They’re very happy when someone calls to check up on them.”

Last Sunday, Majors Mike and Cathy Himes were delivering meals to many seniors in their community. At one of the stops they made, they rang the doorbell and stepped back so the woman could open the door and pick up lunch. She didn’t answer the door, so they rang the doorbell again, and still no answer. They decided to call to check to see if she was ok. She answered the phone and said that she had fallen and couldn’t get to the door. Her son was on his way to take her to the doctor. “We were grateful that we knew her well enough to know something was wrong,” Major Himes said. “I encourage everyone to check on your neighbors and family to be sure they are ok.”

Raul Pereda, President and CEO of PW Power Systems LLC, volunteered at the Hartford Hub, sorting non-perishable food items into food boxes for neighbors in need. “There are folks who are really depending on The Salvation Army to get them through this tough situation,” Pereda said. PW Power Systems fosters a culture of giving and supporting our community, not only with The Salvation Army, but also with Foodshare, and other organizations.” PW Power Systems has supported other disaster response including the Hurricane Maria disaster in Puerto Rico as well as other places around the world. “I would say, selfishly, it’s really rewarding. There’s something about helping others,” Pereda said of his morning filling food boxes. “It doesn’t matter what the size of the task is. Just knowing that it’s going to be a relief and help people in the area is very rewarding and more so helping people who really need it.”

Joe Sanders, an engineer with Hexagon Manufacturing is a new volunteer to The Salvation Army, having joined the effort just this week. He wanted to be involved with helping people in the community and has worked on other disasters with church organizations in the past. “This is an expression of my faith – to share love with people,” said Sanders, “We pray that each person that receives it (food box), receives some of what they need, and receives hope and an ability to move forward.”

Foodshare is a regional food bank, serving Hartford and Tolland counties and is the largest anti-hunger organization in the Greater Hartford area. Foodshare connects surplus food to neighbors who struggle with hunger through a network of 280 food pantries, meal programs, and Mobile Foodshare sites.

The Salvation Army has set up an Emotional and Spiritual Care Hotline for anyone who needs a listening ear. Anyone in the US can call 844 458-HOPE (4673) from 9:00 am to 9:00 pm EDT, 7 days a week. Trained Salvation Army Officers and employees are available to talk, advise, and above all pray for individuals, families and situations.