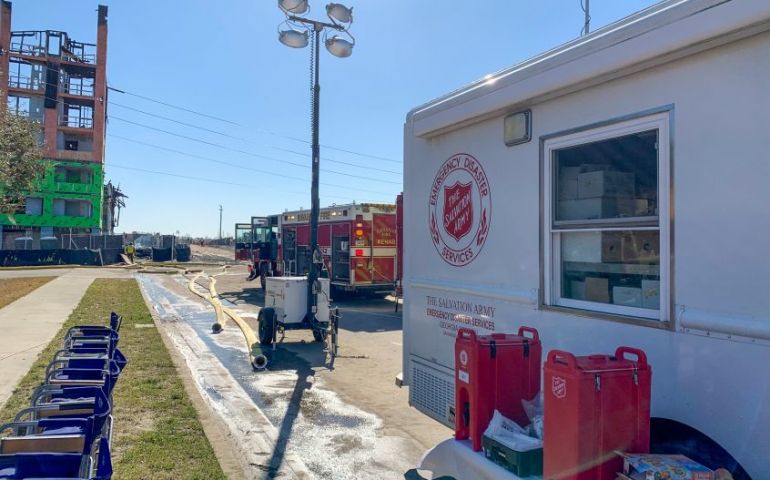 SAVANNAH, GA (February 28, 2020) – The Salvation Army responded to a request from the Chatham Emergency Management Agency Thursday evening to serve firemen and first responders fighting a massive fire at the Eastern Warf Project construction site in downtown Savannah. The Salvation Army of Savannah quickly set up a serving station close to the emergency response area at 9:30 p.m. and started serving 70 firemen and other emergency personnel who had been on scene since early afternoon. The Salvation Amy served hot soup and coffee throughout the night in the 36 degree weather to grateful and appreciative firemen from the Savannah, Garden City, Pooler and Chatham Fire Departments, the Savannah Police Department, and other first responders.

“We are thankful to serve such professional firemen and emergency officials who do such a great job in serving our communities,” said Major Paul Egan, the presiding Salvation Army officer in Savannah. “We will be here to serve fire, police, emergency personnel, and those who serve our community for as long they need to make the area safe.”

At times, the Savannah Fire had as many as 20 fire department units responding on scene working in tandum with the Savannah Police Department to keep the area and local residents safe.

“The impact of this event may be with this community for a long time,” said Major Egan. “But one thing Savanah can count on The Salvation Army for is to always be there in times of need with aid, support, and comfort.”