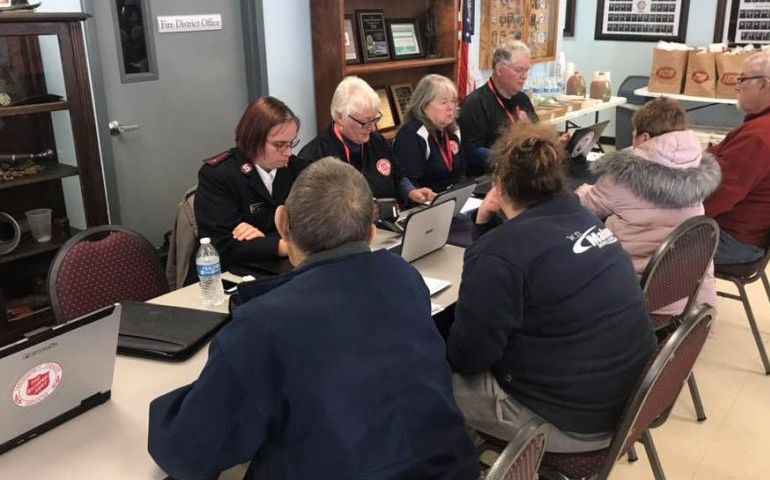 Mohawk Valley, New York – Beginning on Wednesday November 13, 2019 and lasting through Saturday November 16, 2019, The Salvation Army Divisional EDS Teams along with our Herkimer and Utica Corps are participating in four Multi-Agency Resources Centers (MARCs) in coordination and cooperation with the Herkimer Oneida Organizations Active in Disaster in response to catastrophic flooding that occurred on Thursday October 31, 2019 that impacted thirteen counties across Upstate New York.

The incident began in Western New York as a wind storm and as it progressed across the state, it brought over five inches of rain in a few hours to several areas, mostly centered on the Mohawk Valley region.  This heavy rain then triggered flash flooding followed by additional flooding as storm water was released at local dams and hydroelectric plants to stop the risk of the failure of these facilities.

Response efforts began immediately across the entire Empire State Division, working in cooperation with the New York State Division of Homeland Security and Emergency Services (DHSES), County Emergency Management officials in each of the impacted areas and with partner agencies of the New York State Volunteer Organizations Active in Disaster (NYVOAD).  These response efforts then transitioned to local units and The Salvation Army then began working in support of the Herkimer Oneida Organizations Active in Disaster (HOOAD) to meet unmet needs including the purchase and preparation of nearly 14,000 meals and snacks for distribution via partner agencies to survivors and volunteers from out of the area as well as the distribution of over 600 Flood Clean up Kits directly to survivors and to the Herkimer County Sheriffs Office for distribution into areas inaccessible to passenger vehicles.  Services continue in support of feeding operations for the coming weeks as well as casework intake.

Volunteers, Officers and Staff from EDS, the Herkimer Corps and Utica Corps provided information and assistance to all survivors in coordination with numerous area government agencies, social services agencies and relief organizations such as the City of Albany Housing Authority, Albany County Department of Social Services, Red Cross, ARRL and Catholic Charities.

“Today’s Multi-Agency Resource Center shows the strength and cooperation that is at the heart of HOOAD and the hard work and cooperation gained in prior floods in 2011, 2013 and 2017 in many of the same areas..” said Captain Lori Wood of the Herkimer Corps.

As impacted families are relocated into new homes in the coming days and weeks, The Salvation Army will continue to provide recovery and social services until all needs are met.