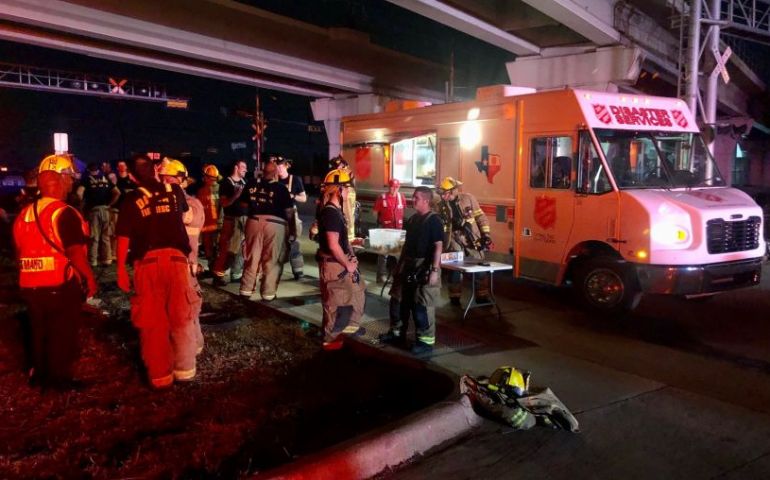 Dallas, Texas (October 21, 2019) – The Salvation Army of North Texas is providing assistance in affected communities after severe weather spawned a tornado that struck the Dallas area on Sunday evening. Several neighborhoods were left without power and structural damage has been reported throughout the areas of the city.

A mobile kitchen and crew from The Salvation Army in Lewisville was activated on Sunday night and provided snacks and hydration to first responders and survivors throughout the evening and into the early hours of Monday morning. The unit set up at a Fire Command Post and served 200 individuals. An additional Fire Command Post was established, and a second Salvation Army unit deployed to this site providing similar support.

“The Salvation Army is actively providing service out in the community after a tornado and severe weather caused significant damage to several areas of the city,” said Major Jonathan Rich, Commanding Officer of the North Texas Salvation Army. “Our trained disaster staff were on the ground within two hours of the tornado touch down and served throughout the night. Alongside our partner agencies we are working on damage assessment today and already have three Salvation Army mobile units roving in affected areas ready to serve food and drinks to residents and first responders, with more units on standby.”

On Monday morning, Salvation Army Rapid Response Units from Irving and Plano, in addition to a mobile kitchen from Fort Worth, were deployed to serve in affected neighborhoods. Disaster response teams from Lewisville and Granbury remain on standby.

An Incident Management Team from The Salvation Army of North Texas was activated on Monday morning and will coordinate response efforts in coordination with local emergency management and voluntary partners.

Several other areas of Texas experienced severe weather on Sunday. A line of thunderstorms moved through Cameron County in South Texas and downed dozens of power lines leaving a number of communities without power. The disaster response team from The Salvation Army of McAllen is providing support to affected residents in Port Isabel.

Financial donations can be made at helpsalvationarmy.org or by calling 1-800-SAL-ARMY to support response efforts. For the latest Salvation Army disaster information please go to disaster.salvationarmyusa.org and watch for regular updates on our social media pages at www.facebook.com/SalArmyTX/ and www.twitter.com/salarmytx