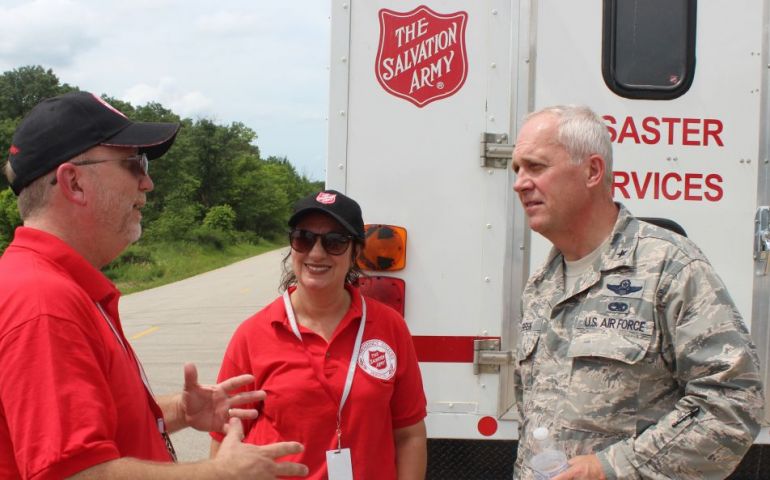 FORT MCCOY, Wis. (July 17, 2019) – When disaster strikes, The Salvation Army relies on volunteers like Phillip and Christine Powers to help execute their operations and serve those in need.

The Patriot North is a Domestic Operation disaster training exercise, hosted by the Army and Air National Guards. At Patriot, governmental and civilian agencies come together with the purpose of increasing the understanding of coordination, policies, and procedures required in conducting a Joint Inter-Agency domestic disaster response.

Phillip and Christine, of Richmond, MO, are staff members for The Salvation Army in Kansas-Western Missouri Division in Ray and Clay Counties, respectively. They’ve been Emergency Disaster Services volunteers for two years and have done five local and national disaster deployments.

When asked why they chose to participate in this year’s Patriot exercise, Christine said: “We want to do anything we can to add to our tool belt, to help us be the best team players we can be. The goal is to be able to be utilized in any position where there is the greatest need.” This exercise provides valuable training opportunities for them to sharpen a variety of skills.

The Salvation Army Incident Commander Captain John Gantner agrees. “The key to our success [in disasters] is our volunteers, and we offer a really robust training for them,” he said.

Already this week the Powers have learned how to set up an emergency shelter, and were used in a training exercise with the military Security Forces, where they were caught in a simulated riot as they were distributing water and snacks to exercise participants. It’s not uncommon for volunteers to encounter disaster survivors who are emotionally charged: upset, angry, distraught, stressed. And even in a training environment, the Powers say they are moved to want to act, to help those in need.

They fully stand behind the mission of The Salvation Army. “We help without discrimination; our mission is to help everyone,” says Phillip Powers.

If you would like to learn more about how you can become a Salvation Army volunteer, like the Powers, visit CentralUSASalvationArmy.org.