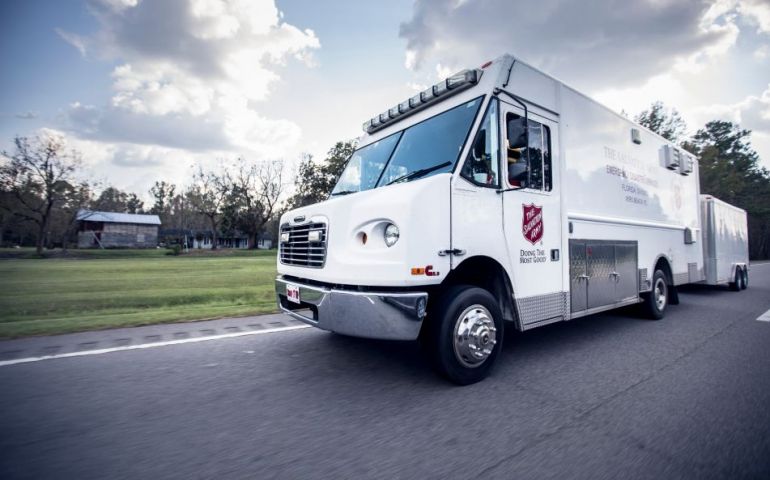 As first potential hurricane of 2019 heads toward U.S., Emergency Disaster Services experts are in position to respond, encourage preparedness

ALEXANDRIA, VA (July 12, 2019) – The Salvation Army is prepared to respond to the impact of Tropical Storm Barry, the first tropical storm of the Atlantic hurricane season to hit U.S. soil. Trained disaster relief workers and volunteers are prepared to meet the immediate needs of survivors and first responders by providing food, hydration, shelter, and emotional and spiritual care in Louisiana, Mississippi, Texas and other Gulf Coast states threatened by the storm.

Tropical Storm Barry is expected to make landfall Saturday as a Category 1 hurricane. The storm’s slow movement toward the coast means extended periods of heavy rain in vulnerable low-lying areas, including New Orleans, which started seeing flooding as early as Wednesday morning. Forecasts call for up to 20 inches of rain in some parts of the state through the weekend, and mandatory evacuations have been ordered for 10,000 residents.

With more than 7,600 centers of operation in the U.S., The Salvation Army is uniquely positioned to support survivors of wide-scale disasters, because they’re often the first on the scene and they stay until the need is met. Mobile feeding units – which can serve an average of 1,500 meals per day – can be deployed to serve meals, snacks and drinks, while trained response staff provide spiritual and emotional care.

“For more than 100 years, The Salvation Army has been serving communities before, during and after a disaster strikes,” said Col. Ward Matthews of The Salvation Army. “The Salvation Army is well-prepared and ready to mobilize our trained staff and volunteers to provide holistic aid to those who may be impacted by Tropical Storm Barry.”

As the Atlantic hurricane season begins, The Salvation Army reminds residents throughout the country to be prepared: