Ready to Serve when Tornado Hits Close to Home 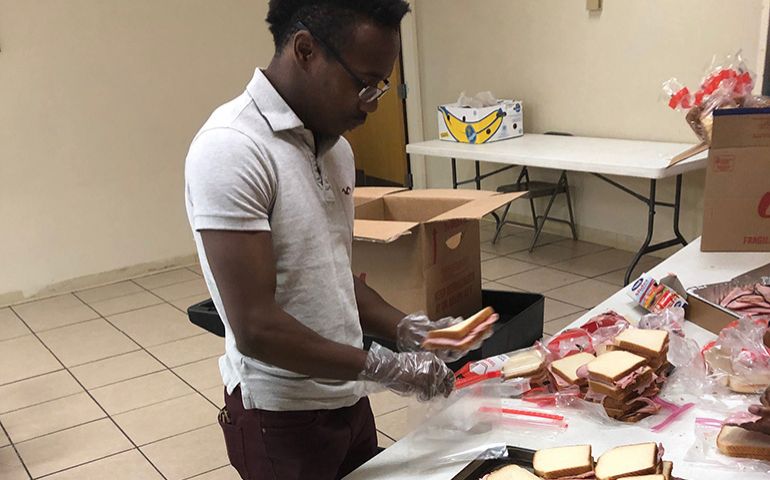 The motto “Be Prepared” took on a new meaning for Salvation Army Lieutenant Alphonso Hughes this past weekend. Most days you will find Lt. Hughes in northern Virginia, where he serves as an assistant at The Salvation Army Alexandria Corps, but last week a family emergency called him home to Columbus, Mississippi. Late Saturday evening, April 13, as tornadoes hit a couple of towns over in Monroe County, Lt. Hughes was in contact with the Columbus Corps to see what help he could provide to their staff and volunteers. “I knew their lieutenant was at women’s retreat, so I wanted to help. It happened really fast and we were told to ‘just go!’” explained Lt. Hughes.

While he and youth evangelism and outreach director, Melvin Franklin, could not get the mobile feeding unit into storm ravaged neighborhoods, they were able to set up a distribution site. They selected a location that was easily accessible to first responders and members of the community. In addition to providing water and snacks, neighbors came by with donations such as tarps that could be distributed to those in need.

By Monday morning, all local officers were back on the job and an EOC was established. Even though Lt. Hughes was not needed on the front lines, he came back to the Corps to help make sandwiches and pack supplies. “You never know when you are going to be called to God’s service. This reminds me to always be ready,” shared Lt. Hughes. “Even when I was going through personal worries for the issues my family is facing unrelated to the storm, God provided me an opportunity to step outside of that and share his love with other people.”