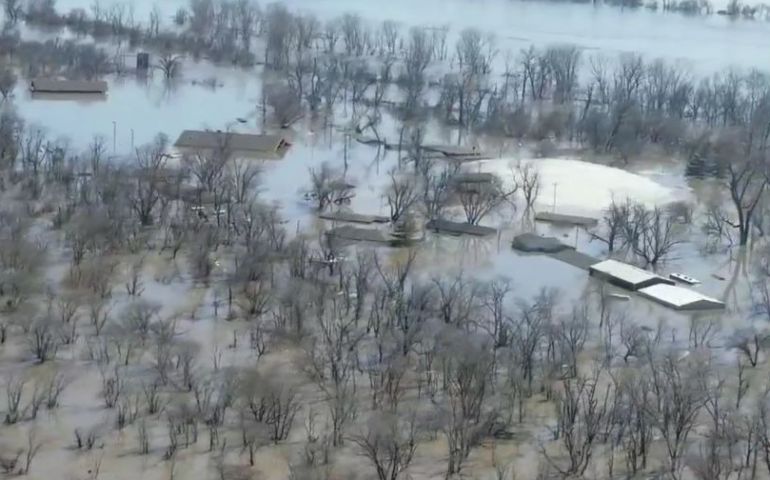 The Kroc Center Omaha team is ramping up its ongoing efforts to support flood relief, with a special emphasis on helping out in Sarpy County, Nebraska.  Additionally, other Salvation Army Corps teams are reaching out to try to get needed supplies and assistance into outstate areas in need.  Following is a review of some of today’s operations, and a look ahead at what’s set for Monday:

In Omaha, NE—The Kroc Center team served some 700 meals and 900 drinks on Saturday as it worked mainly around lakeside communities in Sarpy County.  What’s more, Team Rubcion, a nongovernmental organization specializing in disaster response, has established a base at the Kroc Center as it goes to work in the metro area.   Elsewhere, the Disaster Resource Center continued its operations near 84th and Center—both distributing flood-relief items and taking in donations thereof.  It’s open again Monday from 9 a.m.-6 p.m.

In Council Bluffs, IA—Representatives of the Council Bluffs Corps met with flood-affected residents in Fremont County, Iowa on Sunday.  The Corps team plans to start food-service operations later this week in Hamburg, Iowa.

In Sioux City, IA—Officers and volunteers served 110 meals at lunchtime amid their overall flood-relief efforts.  They are set to travel to Ponca, Nebraska, tomorrow, to deliver supplies there.

In Norfolk, NE—Officers, staff, and volunteers prepared meals at the Corps location.  They have been providing meals to the Santee Reservation in Knox County, Nebraska.  They are also, in partnership with officials, in the process of reaching out to Boyd County, Nebraska, and the community of Niobrara, Nebraska, as they look to provide supplies and other support there.

The Salvation Army is seeking donations to support flood-relief efforts.  To donate:  go to www.salarmyomaha.org and click on the ‘Donate Now’ button.