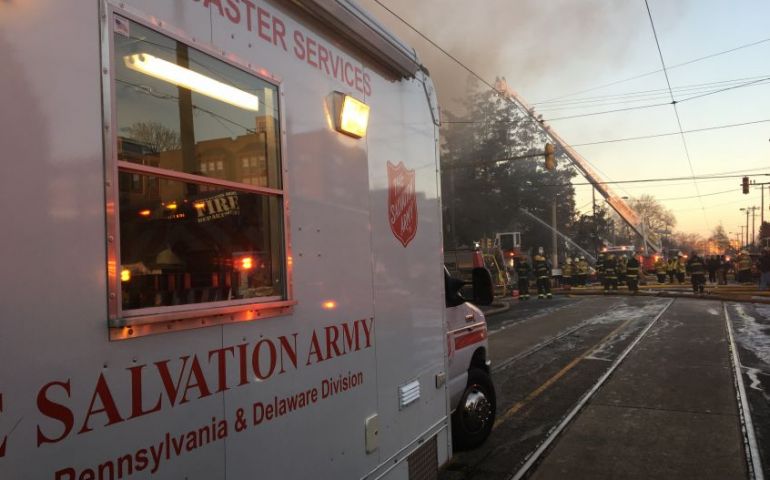 In the early morning hours of Monday, December 10, fire broke out in a large four story apartment complex in the Overbrook section of West Philadelphia.  The fire quickly engulfed the upper floors of the very large apartment complex, forcing the evacuation of all of its nearly 100 residence.  The fire quickly grew to 5 alarms requiring over 150 emergency response personnel to assist.  Residents were quickly evacuated to a nearby school to get out of the elements where additional services were available.

The Philadelphia EDS quickly mobilized with a canteen on scene within 25 minutes of the fire happening.  Team members provided hydration and meals along with hand warmers, blankets and dry gloves to both first responders and residents on scene.  After the reception center was established our disaster team members began providing support to those at the school with meals, clothing, baby supplies and comfort kits in addition to our very critical Emotional and Spiritual Care (ESC) support to the residents left homeless from the fire.

As the day concluded so did our on scene services, after more than 19 hours serving at the site of the fire in support of emergency personnel.  Support of the residents continued as the reception center was transitioned into a shelter at the West Philly High School, a mile and a half from the fire scene.

Since the day of the incident our EDS personnel have been supporting residents at the shelter and those who have alternative arrangements offsite.  Meals are being provided daily to residents and staff, coordination is also taking place with partner agencies and particularly the City of Philadelphia’s Office of Emergency Management.

On Friday, a Multi-Agency Resource Coordination Center (MARCC) was established at the school, bringing in partners from state and local government agencies, as well as the non-profit community, to provide additional support services to clients.  In addition to our daily meals, The Salvation Army has provided vouchers, gift cards and transportation assistance to those impacted by this terrible tragedy.

It is difficult to move forward after any crisis strikes, but particularly hitting so close to the holidays.  We continue to support the residents of the fire complex and pray for all of those whose lives have impact by this incident.