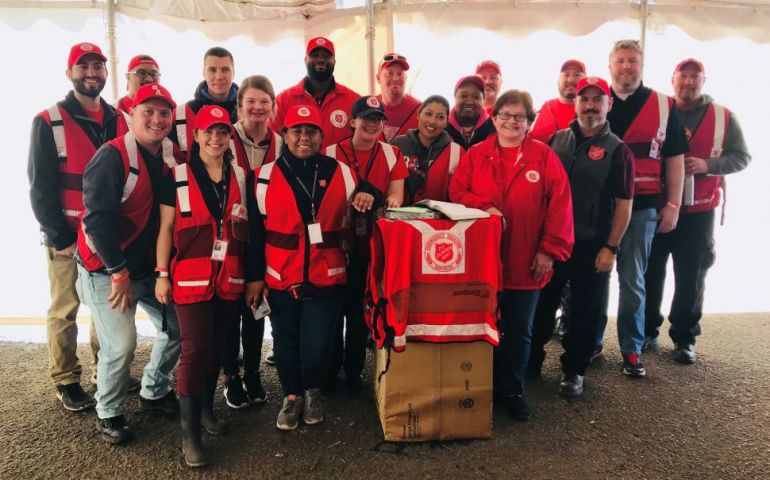 Panama City, FL – This morning, at an altar made from cardboard boxes and draped with a disaster vest, cadets of The Salvation Army’s Southern Territory led a congregation of disaster workers in prayer.  The service, held in a supply tent, brought together Salvation Army and Southern Baptist Disaster Relief workers.  Operating from an empty parking lot, the site in Panama City Beach had become the center of the groups’ feeding operations.  After Hurricane Michael, the mobile kitchens stationed in the lot produced tens of thousands of meals for hungry disaster survivors and rescue workers across the Florida Gulf coast.

The cadets, Salvation Army ‘officers-in-training’ from Evangeline Booth College in Atlanta, have been on the frontlines of disaster relief efforts, cooking, serving meals from mobile feeding units, managing disaster warehouses and distributing supplies to disaster survivors.   Touched by the pain caused by the hurricane, the congregation shared stories of the people they had met, including the story of a child who spoke little after the trauma of the storm. A volunteer reminded her how brave she was standing up to Hurricane Michael’s fury.  On a return visit to the canteen, the girl smiled and told the worker in a clear voice, “I am brave.”

“We have been a source of hope to the community and a comfort to those impacted by the storm,” Cadet Nathalie Arroqui reminded the assembled workers.  “But it is God who provides the strength to go out into the community, to feed people, and to provide hope.”

Disaster work, of course, is not always easy.  In his devotional message, Cadet James Guzman said that if you wanted to, reasons could easily be found to complain: the sleeping tents were cold, waking up before dawn was hard, the work was physically demanding and often exhausting.  “But,” he said, “I serve joyfully because I have Jesus in my heart and the people need us.”

The congregation sang a hymn by composer and General John Gowans, apropos of the call that had brought disaster workers of both faiths to the Gulf coast:

There are people living in the world out there…

There are children crying and no one to care…

And they’ll go on hurting in the world out there,

And they’ll go on dying, drowning in despair,

And they’ll go on crying, that’s unless we care:

“We work together in one spirit,” a Southern Baptist volunteer said, servants of the same Lord, motivated by the same mission.  “And,” he continued as the Baptists headed out to cook the day’s meal, Salvation Army disaster workers to board canteens and feed, “That makes the work easier.”

Since Hurricane Michael made landfall in October, The Salvation Army, working with partners like the Southern Baptists, has served 755,935 Meals, 384,641 Drinks, 533,185 Snacks and 20,444 Food Boxes in hurricane-impacted areas of Florida and Georgia.  More than 75 mobile feeding units and 2 field kitchens were mobilized at peak operations.  Emotional & Spiritual Care has been provided to 48,099 individuals.  (Statistics as of November 18, 2018)

How You Can Help

Response and recovery operations for Hurricane Michael are expected to be costly and continue for months to come. The best way to help after a disaster is to make a financial donation.  Please support Salvation Army disaster relief efforts by donating: