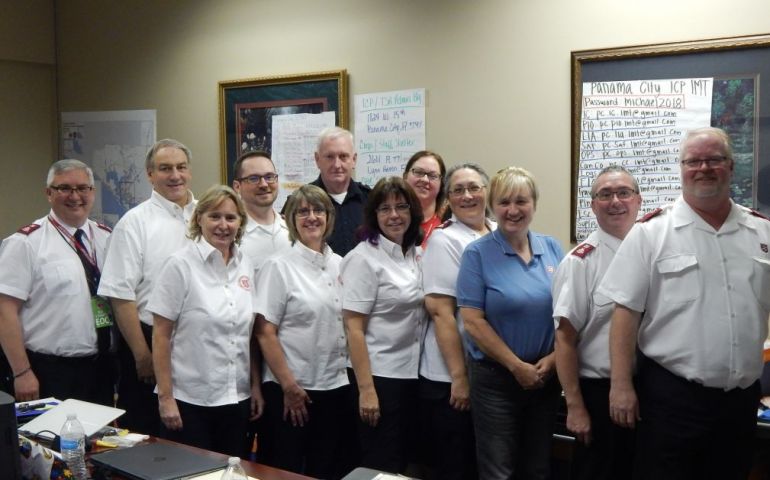 PANAMA CITY, FL (November 4, 2018) – A team of 12 Salvation Army emergency disaster personnel from Canada have their boots on the ground to manage operations in the Florida Panhandle as residents continue to cope with the destruction and devastation from Hurricane Michael.

“We are extremely grateful to have our Canadian counterparts managing operations in Panama City,” says Steven Hartsook, Divisional Disaster Service Director, The Salvation Army of Florida. “The presence of the Canadian Incident Management Team (IMT) ensures we can continue with our operations and service delivery.”

Members of the Canadian team come from across the country and some have previously been deployed to help The Salvation Army’s response to Hurricane Harvey and Irma.

“The team comes with a complement of varied experience and willingness to serve,” says Carolynn Barkhouse, Incident Commander. “We want to provide supportive services that people need to rebuild their lives. We want to simply walk alongside them as they work to establish a new “normal” and reclaim hope for the future.”

In Canada, The Salvation Army’s Emergency Disaster Services program began back in December 1917 in response to the Halifax Disaster. As one of Canada’s major emergency relief organizations, The Salvation Army is often assigned specific roles by emergency preparedness authorities to incidents of various sizes and scopes.

“It’s been over three weeks since Michael made landfall and our personnel have worked tirelessly to provide food, emotional and spiritual care, and cleaning supplies,” says Hartsook. “We are seeing an increase in the distribution of bulk product such as food boxes, clean-up kits and tarps,” says Hartsook. “This is a city that needs long-term help.”