Inspirational Stories from The Salvation Army in South Georgia 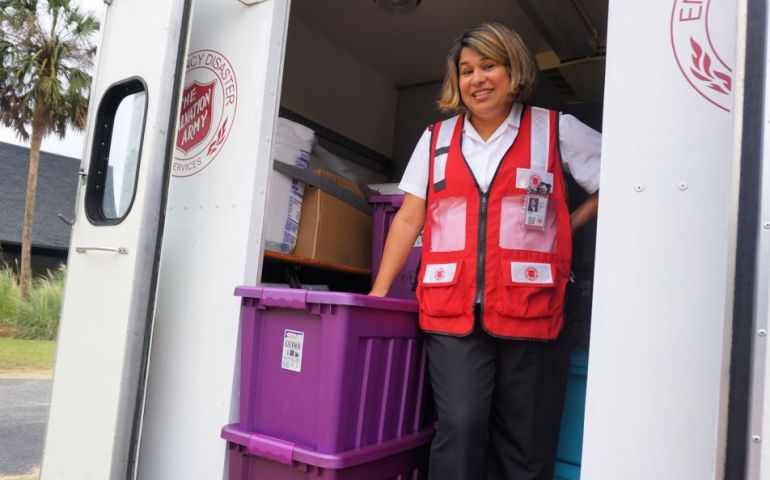 BAINBRIDGE, GA (October 27, 2018) — After two weeks stationed in the southern counties of Georgia, Captain Claudia Roseno paused to reflect on some of the people she has ministered to along the way.

Captain Roseno also spoke of her visit to the small, rural town of Damascus, GA. “We didn’t even have an address. They told us ‘Go to the gas station and ask for directions’.” From the gas station, they were sent to the fire station up the road. Waiting for them at the fire station where the Mayor and City Clerk as well as a group ready to unload the canteen and volunteers to dispatch meals to the town’s elderly population. “It was a tiny, rural town without much, but they look after each other. It was a blessing.”

But the Captain’s favorite story was that of EJ, a nine-year-old boy she encountered in Blakely County. EJ walked several blocks to find the distribution point and ask if he could have supplies for his family. Captain Roseno was able to take the canteen into his neighborhood and visit his family. When EJ asked for some water, she handed him a case. “Holy Moly!” he exclaimed, “I can have the whole thing?” This sweet boy was overjoyed over a case of water. “It was so inspiring,” Captain Reseno recalled, “to see kids looking out for their families. It speaks to the need we have to build up the kids in these communities.”

How to Help:
The best way to help survivors and relief workers is to make a financial contribution. Monetary donations allow disaster responders to immediately meet the specific needs of disaster survivors.

Donate by text: Text STORM to 51555 to receive a donation link for easy mobile giving.