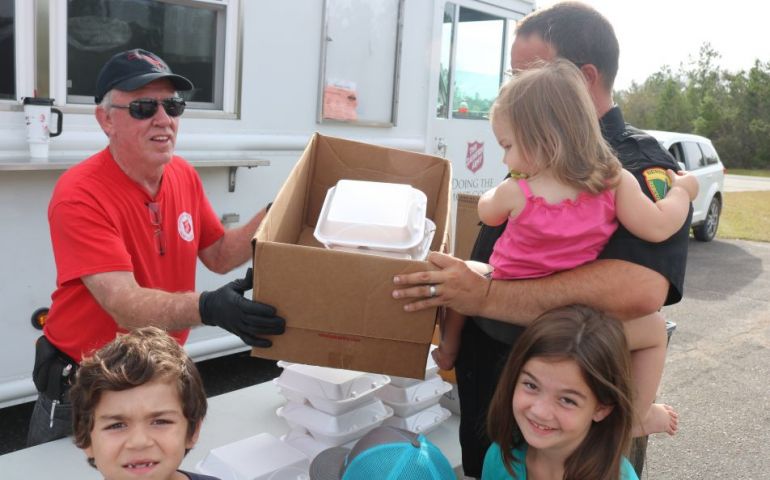 Alford, FL (October 24, 2018) “I’ve cried all I can stand to cry. And if I keep crying, I’m not going to get anything done. We’re alive, and if I have to rip everything out and start over, that’s what I’ll do,” said Hurricane Michael survivor, Josh Williams.

Josh and his wife Rachel are both traveling medical care professionals. As Rachel accepted a new travel nurse contract in New Hampshire, Josh and the kids moved into their first home in Alford, FL just last month. Rachel had recently inherited the 800 square foot home, which was passed down in her family for generations. The young couple were looking forward to renovating and expanding the family heirloom until Hurricane Michael struck the Florida Panhandle just two weeks later.

“I thought it was just a tropical depression, so I didn’t even get groceries. We typically don’t get any television or internet service in this area, so I didn’t know it was a hurricane until my wife called.…that was two hours before the storm hit our house,” said Josh.

Though the house is still standing, much of the infrastructure has been destroyed. The category 4 winds tore off exterior boards of the house, destroyed floorboards, and flooding in the kitchen and bathroom mixed with the humidity, festered into black mold. With a deteriorating house, no running water, and lack of electricity, Josh had a million and one things to worry about, including where they would get their next meal.

“My kids ate bread for the first day and a half. That was hard,” said Josh. He went to a nearby distribution site to get an abundance of snacks and MREs, or Meals Ready to Eat, for his family for the first few days. After almost a week, Josh finally got phone reception. It was then that he was able to go on Facebook and discover that there was a Salvation Army feeding site by his local fire station, just a few blocks away.

“There is a difference between food out of a package and food that has touched a stove,” said Josh. The hot meals from The Salvation Army canteen were the first cooked meals that Josh and his family have had in almost 2 weeks. Canteen members also gave Josh some tarps to cover the walls of his house.

Josh and the kids are now staying at a relative’s house until he and his wife can figure out how to rebuild their family heirloom, entirely out of pocket. In response to Hurricane Michael, the Salvation Army as of October 22nd has served 314,938 meals, 174,533 drinks and 166,781 snacks. The Salvation Army is there before, during and after the storm.