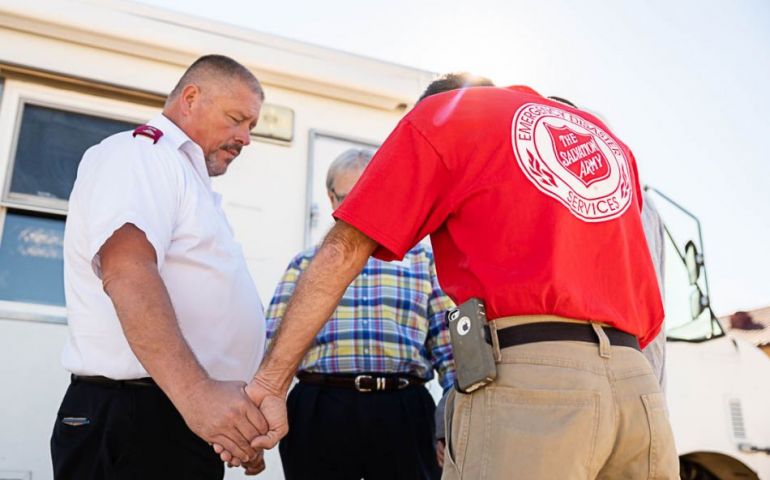 Jackson, MS—Hurricane Michael slammed the Gulf Coast yesterday as a devastating Category 4 hurricane. The Salvation Army Alabama, Louisiana, Mississippi (ALM) Division is wasting no time in sending help where it's needed, deploying 26 personnel and 7 mobile feeding units to areas in Alabama, Florida and Georgia. One of those crews departed this morning from Jackson, Mississippi, headed to serve in Panama City, Florida. The Jackson Corps just recently had two crews servng in the Carolinas after Hurricane Florence and is proud to serve again in response to Hurricane Michael.

“I'm excited about going. I just love disaster work, it's a great ministry and I'm looking forward to being able to serve people,” said Major Robert Lyle, Corps Officer for The Salvation Army of Jackson, MS. Major Lyle will be serving on an Emotional & Spriitual Care team in Panama City, Florida. The Jackson Corps is also sending a canteen crew to Panama City, manned by Kenneth Magee and Rich Eby. Rich is the more experienced of the two, having responded to at least half a dozen disasters with The Salvation Army, but this will be just the second time for Kenneth—his first was last year after Hurricane Harvey. Kenneth is excited to serve again, saying, “It's helping folks out, that's a good thing. I'm happy to help.” The Jackson team joined hands in prayer before hitting the road to the devasted Florida panhandle.

As of today, the ALM Division has sent one 8-person Incident Management Team and five canteens to Panama City, Florida, as well as five individuals and one canteen to Dothan, Alabama, who will join the local Dothan staff and canteen already responding to hurricane survivors there. The ALM Division has also sent support staff to help with the disaster response from Salvation Army Territorial Headquarters in Atalanta.