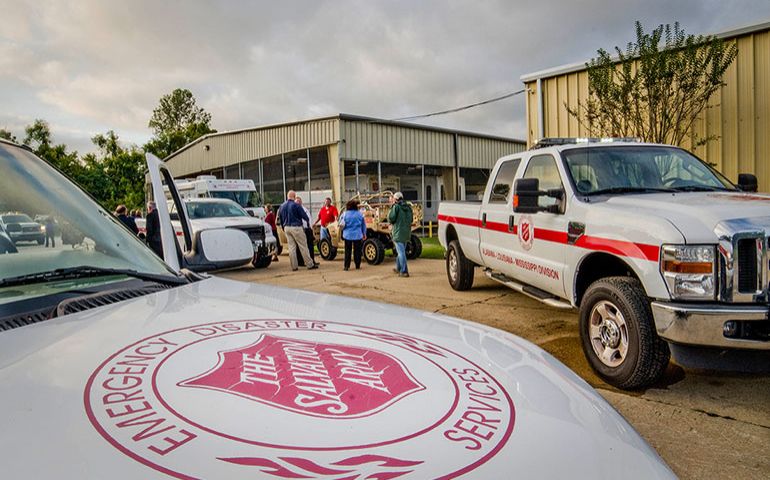 Jackson, MS— With Hurricane Michael churning in the Gulf Coast and expected to make landfall in the Florida panhandle today as a major Category 4 hurricane, Salvation Army emergency response teams throughout the southeastern United States are readying to respond. The last of The Salvation Army’s Alabama, Louisiana, Mississippi (ALM) Division teams headed home yesterday from Hurricane Florence service in the Carolinas—just in time to prepare for this new threat posed by Hurricane Michael. The ALM Division is sendng a full Incident Management Team to Pensacola, Florida, which will cover the Pensacola and Fort Walton Beach areas. The Salvation Army in ALM is also preparing to respond as needed in Coastal Alabama, which is currently under a Tropical Storm Warning/Hurricane Watch and even Coastal Mississippi, which is currently under a Tropical Storm Watch. “The path of this storm is still somewhat unpredictable, so we will posture ourselves for response as necessary,” said Terry Lightheart, Emergency Disaster Services Director for The Salvation Army ALM Division.

The Salvation Army’s Dothan, Alabama Corps is already serving those impacted by the storm. Three evacuee shelters opened in Dothan yesterday, serving evacuees from the Florida panhandle. The Salvation Army served dinner last night and will serve all three meals today to the shelter residents. The remaining Salvation Army locations along the Gulf Coast are bracing for possible flooding and, along with the rest of the ALM Division, are watching, waiting, and preparing to serve as needed.