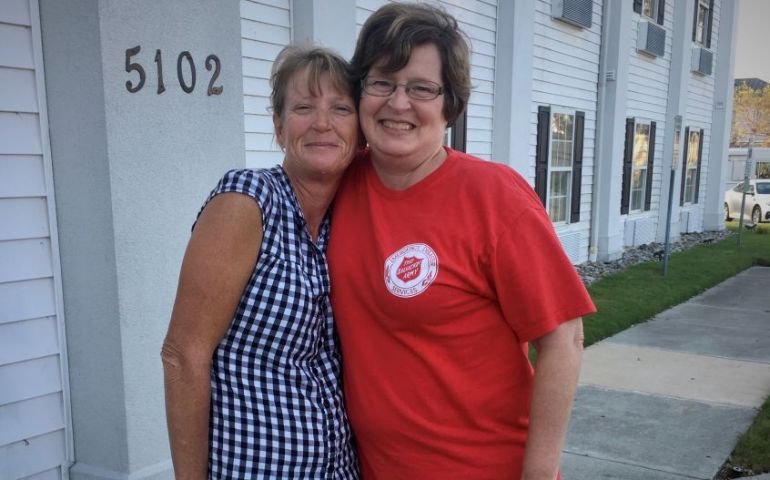 Wilmington, NC (October 1, 2018) - Susan Gilbert, proud Navy mom and Director of Social Services for The Salvation Army in Tupelo, Mississippi, found herself headed to North Carolina to serve as a Mobile Feeding Coordinator in the wake of Hurricane Florence.

As the storm was coming through, Susan saw a fellow Navy mom post a request in their online group asking for prayers for her home and family. The woman, Theresa, lives in North Carolina and had been evacuated earlier in the week with her family by helicopter as 9 feet of flood water engulfed her home.

Theresa had been visiting her sailor son in San Diego, California when she had to hurry home to prepare for the storm. Though she lives near a creek, she didn’t expect flooding to be an issue because her home was able to withstand Hurricane Matthew two years prior.

Having never met, Susan sent Theresa a message to let her know she was praying for her. Through that conversation, Susan found that Theresa lives in Wilmington, the same coastal town where Susan had been deployed for disaster relief with The Salvation Army.

“She called me crying, saying everything was covered in mold and mildew,” says Susan. “She sent me pictures of buckled floors, water still in the trailer, and shelves on the floor that had held soccer pictures and trophies.”

“They had eaten from our mobile kitchens earlier in the week, and I was able to give her information on how to apply for FEMA and other assistance,” Susan shares. “She’s so appreciative of everything.”

Among the items she was able to salvage were baby pictures, the picture of her son when he graduated from bootcamp, and gifts from each county he’s visited so far with the Navy. With nearly everything else in her home lost to water damage, Theresa’s grateful to recover these treasures.

Susan is nearing the 18th anniversary of when she first served with The Salvation Army for disaster relief. “It’s meaningful to be able to support a family that also has a child willing to sacrifice his life and time away from home. I’m thankful to be able to help families in what may be the worst time of their lives.”