The Salvation Army Canteen a Welcome Sight in Loris, SC 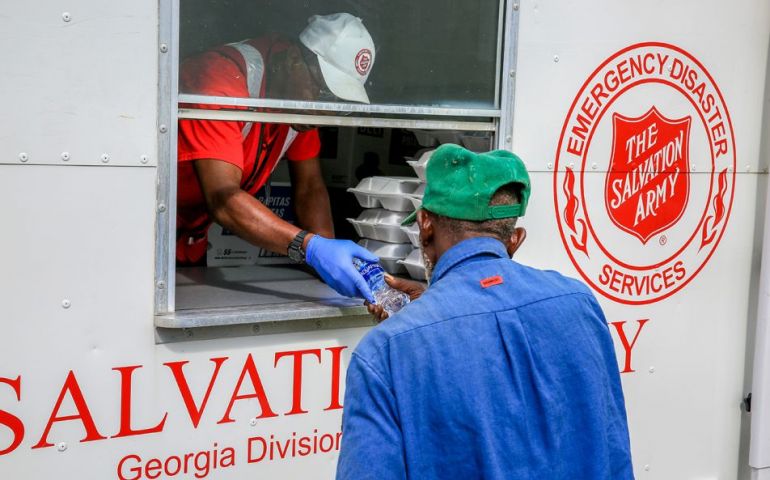 LORIS, SC (September 26, 2018) - For the last few days, The Salvation Army canteen (a mobile feeding unit) from Columbus, Georgia trundled through Loris, S.C. serving meals and drinks to those impacted by Hurricane Florence. The Columbus canteen is part of a contingent of ten other canteens, and 45 staff and volunteers from Georgia that have joined forces with over sixty other canteens and Salvation Army personnel from around the southeast U.S. helping in Hurricane Florence disaster relief efforts in the Carolinas.

The Loris Fire Chief advised Georgia canteen coordinator, Michael David, affectionately called “Pastor Mike,” and assistant Dennis Sims, to focus on a little corner of the small town in the poorer section that was hardest hit and needed the most help. And, so they did.

The canteen is a familiar and welcomed sight in the community as it daily meanders through the narrow streets tapping its horn to let people know that food, drink and an encouraging word were available.

“I’m looking for you guys each day,” says Sherry Williams and she approaches the canteen stopped in front of her house. “The whole community loves you guys. We have a good time when you come around and we all eat together.”

Ms. Williams lives alone in her little home with striped metal awnings. “The storm cracked my house – look at that!” she exclaims, pointing to the cracked cinder blocks close to her foundation. “The rising waters knocked out my electricity and FEMA says I need a new electrical box and new wiring.”

Since she doesn’t have electricity, Shelly can’t cook food on her stove and welcomes the meals and drinks supplied by the Georgia canteen. Her neighbors stop by periodically to make sure she is okay. “Thank you,” she says as she turns to go back into her house carrying a stack of meals for herself and her neighbors, “Thank you so much.”

A stop down the street and around the corner just before the Leggett and Troy Funeral Home provides a dozen meals to a family grieving the loss of their grandmother. “Thank you,” says one of the young men taking meals inside, “This means so much today.”

Betty Vignone is waiting by her mailbox when the canteen comes by. “You folks are beyond fantastic,” she says, motioning enthusiastically with her hands. “Who makes that spaghetti? And that sauce, it’s so good! I’m Italian and I feel like a kid in a candy store when you guys come by.”

Residents west of the railroad tracks warned Pastor Mike not to go across to the east side where a notorious cluster of ramshackle huts sat close to the tracks. A Vietnam veteran, Pastor Mike has gone where few have gone before. And as an eighteen-year manager of the Columbus, Georgia Salvation Army shelter, he has worked to mend the broken lives of thousands. Undeterred, he turns the canteen east to serve the poorest of the poor and least of the people in Loris. “God loves everybody,” says Pastor Mike, “They have to eat, too.”

A small group of men sit on old crates and wooden boxes gathered under a large shade tree. They look up from their casual conversations as the canteen rumbles across the railroad tracks and pulls to a stop on the opposite side of the road. “Hey, guys!” Pastor Mike calls out, “Good to see you. Come and get something to eat!”

The men rise slowly and make their way to the canteen. A dozen more are drawn out from windowless and weather-worn wooden structures by the promise of a hot meal and something cool to drink. Few words are spoken, but those that are express humble and profound gratitude. “It means so much that you would do this for us,” says one man in tattered clothing, whose diminutive home was destroyed by rising waters. “The water in my house was up to here,” he says putting his hand to his waist. “That was mine” he says, pointing to a mangled heap of furniture ruined by the tainted flood waters just a few feet from the canteen.

“We’ll be back,” assures Pastor Mike.

“We’re counting on you,” replies a soft voice. “Ya’ll are good people.”