It's Not Over, The Salvation Army Is Here 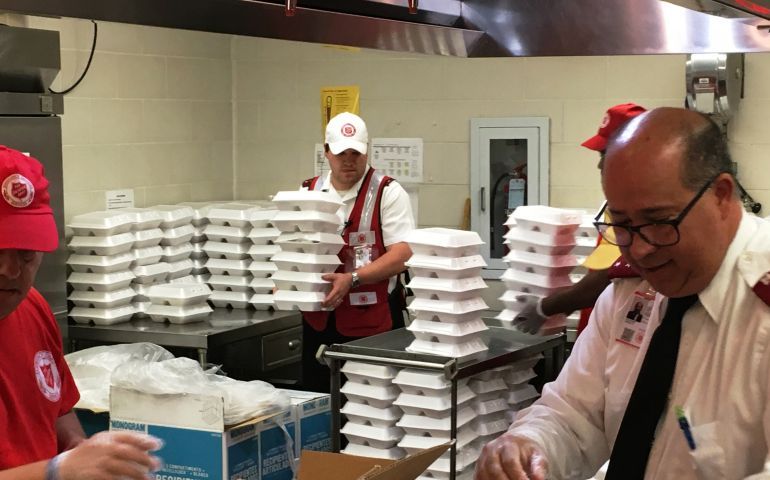 (Georgetown, South Carolina) Georgetown, South Carolina lies on the coast between Myrtle Beach and Charleston. When Hurricane Florence tore through the Carolinas, Georgetown was largely spared. In the words of Corps Officer Capt. Tim Scott, “It was kind of on again, off again. We thought it was going to hit, then it turned north. Then south, and finally hit north of us.” Corps Officer Major Melissa Scott added, “We thought, Hey! We’re okay.”

Fallen tree limbs and minor flooding were about the extent of the storm damage. Shelters opened, meals were distributed, and survivors and first responders were served. The few who evacuated went home and joined their neighbors in cleaning up from the storm. The news media, gathered up and down the coast, reported their stories and moved on to the next big thing. The storm had passed, the emergency was over.

But in Georgetown, the story is just beginning. Record rains upstream of the four rivers that drain into Winyah Bay in Georgetown will cause major flooding. “It’s a slow moving disaster”, in the words of Capt. Scott.  Many areas of the historic downtown area will be under ten or more feet of water in the next 72 hours. Highway access from the north is already almost totally blocked. National Guard troopers are installing aqua dams, water filled coffer dams, along highways, knowing they will fail when the flood hits but hoping they can buy some time so evacuees can get out and supplies can get in.

As the waters rise, The Salvation Army is preparing. Six Mobile Feeding Units (canteens) from Salvation Army Corps in Georgetown, Columbia, Charleston, and Anderson, South Carolina, Albany, Georgia, and New Orleans, Louisiana, have been positioned on each side of the rivers, knowing that bridges will soon be impassable. Officers, staff, and volunteers are girding for the days to come.

The “slow moving disaster” is beginning for the good people of Georgetown and The Salvation Army is here, ready to serve.